Upon release, Borat (2006) was something of a cultural phenomenon. The film introduced the antics of Sacha Baron Cohen to a far wider audience and threatened to unleash (or re-unleash) a style of comedy predominately focused on tricking unsuspecting bystanders into being part of the action. It also proved to be probably the most quotable film since Anchorman (2004), and there was a time there you couldn’t go anywhere without copping someone’s annoying as shit Borat impersonation.

Unlike Anchorman, at least to my mind, the cultural impact of Borat seems to have waned a fair bit. Revisiting the film now, it is easy to see why. When it was released, I was right in the film’s target audience, being a male in my late teens. Even then, I found the film quite mean spirited and a little wary of what it was trying to achieve. Fast forward nine years and those concerns have well and truly crystallised. This is an awful film. The way that Baron Cohen interacts with (predominately) well-meaning regular people, comes off as profoundly mean. The film is also far less satirically biting than I recall too. Really, the only part that lands is Borat’s interaction with the horrific jocky college bros on a road trip. Baron Cohen intelligently paints them into a corner, exposing their shocking prejudice and typical ‘white dude’ outlook on life. You can almost hear them wailing that women run the world and that the social justice warriors are ruining their comic books and rape jokes. That sequence is immediately followed by the only other sequence that threatens to deliver a similarly biting punchline, when Borat visits an evangelical mega church. But in reality, the salient points made here really only come from the sheer insanity of the parishioners, not anything to do with Baron Cohen’s skill as a performer. 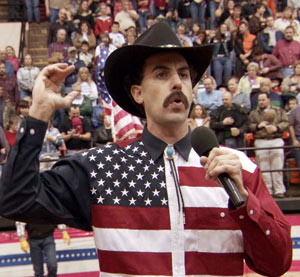 The major downfall of the film is that it never regularly achieves its goal of skewering American society. In that light, the film’s racism and misogyny becomes a little harder to ‘enjoy’. In fact, many of these aspects of the film (the portrayal of Kazakhstan for example) really add nothing to the supposed satire of the film. As horrible as all that is, the interactions that Baron Cohen has with members of the public leave me feeling the most uncomfortable. Most of the film is Borat annoying or triggering physical altercations with people going about their day. For every time that works and achieves a point, there are four or five examples of him harassing really quite sweet people, such as the driving instructor who goes totally out of his way to be polite and supportive of someone he thinks is new to the country. This same dude also totally subverts expectation when he launches an impassioned defence of women’s rights when fed lines you have to suspect were designed to elicit a different outcome. This is all the more frustrating as Sacha Baron Cohen is a distinctly skilled, not to mention ballsy, performer. He is just much more successful at displaying this skill in material that is not his own, Hugo (2011) and Talladega Nights (2006) the two examples that spring immediately to mind.

Verdict: Borat is less intelligent, satirical and funny than I recall. In fact, there is rather little of all three on display. It is an exceptionally mean spirited film too. To be clear though, that naked fight between Borat and his overweight, overhairy producer is still pretty funny.  Schooner of Tooheys New

Related beermovie.net articles for you to check out: A Hard Day’s Night and Ghostbusters.