Time for another year end wrap-up. As per tradition, it’s a solid month after everyone else has done theirs. 2019 was a bit of a funny film-watching year for me. There were lots of really long stretches of not seeing anything due to family and work things. But I ended up watching around 85 releases for the year. Which is more than enough for most people, but a little down on recent years for me. Here’s some thoughts on my favourites. Hyperlinks are to podcast reviews.

First up the honourable mentions. I saw Booksmart after much of the hype and was pleasantly surprised at how silly funny it was. Toy Story 4 was a strong, character driven effort from Pixar. In terms of docos, Eva Orner’s shocking and methodical Bikram: Yogi, Guru, Predator was the best that’s not listed elsewhere here. It was a strong year for drama. The Hate U Give, Atlantics, Galveston and the Florence Pugh starring wrestling biopic Fighting with my Family were all excellent. Conversely it was a pretty crappy year for the blockbuster following a couple of strong ones. Godzilla: King of the Monsters the only one worth mentioning for me.

Guava Island had some of my favourite moments of the year even if it didn’t totally come together as a whole. In terms of shorts, Oscar winner Hair Love and Chris Elena’s latest Audio Guide were both films I absolutely loved. I can’t recall the last time I had no Australian films or horror films on my list. Slam and The Final Quarter, two sharp examinations of race, were the best of the former. While Tumbbad was my favourite horror film of the year (and was on the list right up until the last moment when I realised I had forgotten something), just in front of Jordan Peele’s excellent second feature Us. Doctor Sleep was very good for the most part and the shortfalls are really down to elements outside of the filmmaker’s control I feel.

Really liked this. Mixes the dramatic and the comedic really well. The latter with some nice elements of farce. Thematically focusses in on difference: Chinese, Chinese-American, Chinese-Japanese, generational. How all of these factors intermingle. It’s all stylishly directed and shot with a script that avoids the obvious beats. Awkwafina gives one if the best performances of the year with a surprising sense of quiet.

I genuinely believe we are in a golden age of both the teen film and the romance film, due in large part because a broadening of the voices telling the stories. Neither of these films represent the pinnacle of either of those genres. But I think they both serve as interesting mashups of the two and are also idiosyncratic, thoughtful attempts at mainstream fare.

After their creatively brilliant 2018, Marvel had a pretty average year. Both of their big releases didn’t rise above simply ok levels. But I had such a blast with this. Wryly avoiding multiverse complexity and serving up a romantic comedy in the MCU was a great choice after the big Avengers blowout. More delightful teen romances with a splash of superheroey stuff on the side please. Delightful and energising, this captures the overwhelming feel of being a teen, let alone a superhero one. And Zendaya’s MJ is an exceedingly cool character too and different to the usual love interest. Her performance was one of my absolute favourites of the year too.

Friends I cried like three times watching this movie. It opens with this bloody lovely little treatise on the importance of touch and it just kept on being unexpectedly thougftul and melodramatic the whole way through. Haley Lu Richardson has an incredibly presence as Stella and even if Cole Sprouse can’t quite always match that, their chemistry in the film’s big moments is excellent. This a teen romance film that absolutely nails that angle, but that also engages with death and super serious chronic illness in a way that is both beautiful and genuine.

It is hard to combine clear autobiographical connection with storytelling as often it becomes indulgent or cloying. But Almodovar’s consideration of an ageing director reflecting back manages to avoid that. The physicality of Banderas as he inhabits a man breaking down on a number of different levels is nothing sort of stunning. The second half of the film is so rich in its examination of drugs, ageing, the complexities of mother son relationships and people. Thanks to the wonderful script, plus one of the year’s best performances from Banderas, this is a quite beautiful examination of both life and the place of art (in this case film) in it. The way that something you’re passionate about interacts with, and is impeded by, the crushing sadness of life.

Some may not even consider this a film. But I do and it’s my list. The comedy is a mix of the silly and super thoughtful, which is a winning combo when delivered by Slate who has a gifted range with which to convey her material.  But the aspect of this that really sets it apart from a lot of stand-up specials is the deep storytelling approach. I mean there’s a great, weird segue into analysis of a haunted house, which leads to some really interesting considerations of family and growing up. Her vulnerability as she discusses her stagefright is the kind of insight that I’ve not seen in this kind of thing. And I got really emotional when Slate discusses love.

You know if all we had Ava DuVernay to thank for was the work her distribution company does, she’d be one of the essential people in the film industry today. Array continue to find cinema from a diverse range of voices all around the world, and thanks to their arrangement with Netflix they have access to a super wide audience.

The Body Remembers When the World Broke Open 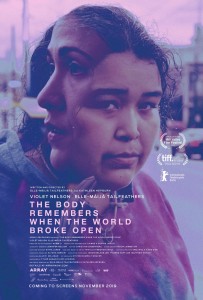 This is a film so steeped in realism it almost feels brazen. A magnetic lead performance from Violet Nelson. What could have been a clinical and distant film is rendered meaningful and close by the performances and the building up of fragile, shallow relationships and alliances. These are built and fracture against a backdrop of deep yearning and high personal stakes. Showing how difficult the little moments are in domestic violence situations. Builds slowly, through dialogue and decision points to a really fucking hard, but methodical closing.

The Burial of Kojo 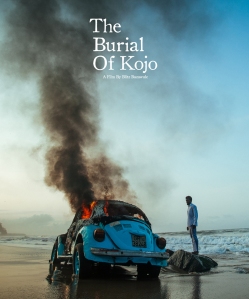 To me this film encompasses so much of what makes Array important. First time filmmaker, made in Africa on a miniscule budget. Yet on our radar because of who is putting it out and the ease with which it can be seen. All stuff I’m very happy about because this is an amazing film, visually haunting with unique storytelling. There’s a definite magical realism dynamic, but the human interactions are grounded in real shit. And rather than jarring, these two elements mingle and enhance one another. A film about grief, illusion and guilt. There’s a shitload to unpack and consider here.

5. If Beale Street Could Talk

Barry Jenkins is a hell of a filmmaker and romantic storyteller. Baldwin’s book is amazing, but does not lend itself to simple adaptation. Jenkins turns in a boldly lyrical adaptation in response. One that utilises voiceover, gentle montage, black and white still images and the like to recall literature without breaking the engagement with the film’s story. In the hands of a lesser artist this could have felt clunky. A strong central romance sits alongside a through line of the weaponised racist biases of the criminal justice system. The lead performances from Kiki Layne and Stephan James drive all of this and the whole thing is set to the best score of the year which is brilliantly incorporated. 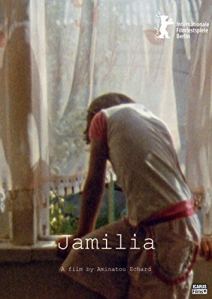 As far as I’m aware, this Kyrgyz film that functions as a companion piece to a classic novel from that country, got its first Australian release on Mubi in 2019. Shot on (awesome looking) Super 8, it’s a film that probably does require you to read the 1958 book by Chingiz Aitmatov, to get the full experience. But its amazing cultural insight to see women discuss this central figure from the novel, who is predominately beloved, especially as the film provides a vision of a particularly patriarchal society. They talk about her (a woman who left her husband) as a heroine and dig down into the ramifications of what she did. Its super artistic, with a strong sense of place for a doco like this. Love stories that are not straightforward, with the telling driven by complex considerations of a novel. There’s a poetic diversity to the stories told as well.

Karyn Kusama’s best film to date is a fierce crime flick. I don’t usually go in for the physical transformation thing. But here Kidman looks haggard and chilling and the nuanced performance brings all of that out. It’s a fantastic, pretty dark, emotional performance. Invokes a lot of LA crime fiction in the way it’s also portrait of the city, particularly Michael Connelly’s work. Gives an excellent sense of traversing LA. The plot is grounded heavily in the harshness of that location. A crime story that is also a portrait of how a person deals with guilt and trauma over a long period of time, here processing it through (misguided?) obsession. The best crime storytelling takes the standard beats and twists them to a slightly different end. And this does that beautifully on a couple of different levels.

2. Portrait of a Lady on Fire

A striking feat of filmmaking and storytelling, particlualry in the way that the central romance builds with pacing and a sense of intrigue. Incredibly shot – I have thought more about the image of a naked woman smoking a pipe in front of a fire, drying her canvasses, than any other this year. Painting and art infuses the rest of the film. The way the camera lingers on individual parts of the body. The craft and painstaking progress of art. The script is poetic, but also blended with light and funny turns of phrase. A seriously good film about regret, lament, absence and togetherness. It’s possible this is the film that will linger most in the mind from 2019.

This portrait of Alex Honnold’s free solo ascent of El Capitan is a modern documentary masterpiece. There is tension here that belongs to the finest genre films in cinema history – even if as I did you know the result of the climb before you see it. Much of that is down to the shooting of the film, which is a combination of sporting prowess, ambition and creativity. But underneath all of that, and the feat at the centre of the film, is a deep well of human focussed analysis. There are insights into process and planning. Rumination of the nature of risk, both for the one crashing into it face first, but also for those around him. Particularly effective are the scenes showing the effect of shooting the climb on Alex’s close friends who are undertaking it. It’s also an unsanitised study of Honnold as a person. Some dismiss him as an asshole, but the film considers what his level of singular focus, obsession and genius leave for personality and relationships. Wildly good.