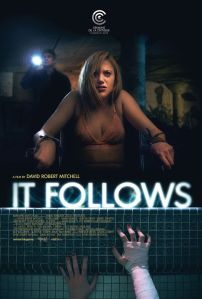 In these days of VOD release dominance for genre films, it’s great to see an indie horror film like It Follows (2014) getting such a solid release around the world. Here in Australia it’s playing in a fair few cities and I know it has performed very well in the States too.

The film follows Jay, a young woman infected with a malady following sex with her new boyfriend. A lot has been made of the fact ‘it’ is transmitted through intercourse, resulting in an expected focus on the theme of STDs and claims that the film is anti-teen sex. The latter is not really supported by the film, but there is no doubt there is a cautionary aspect to the film in relation to STDs, though it never feels like uber-obvious preaching. On one level this thematic concern is an extension and amplification of the sexual politics of classic 80s slashers, where intercourse was usually quickly followed by a brutal death. But It Follows also reinterprets this notion and updates it for today. The film accepts that teen sex happens and that it can be really fun and grand. That can be true and ‘it’ can still be transferred through the act. On this front, and a range of others, the film feels perfectly attuned to teen life. We barely see any parents in the film, which emphasises the teen focus, not being distracted by the potential passing of judgement from the disapproving olds. And just as teenagers often do, it’s a really nice touch that most of her band of friends believe Jay’s plight pretty much straight away with very few questions asked, when there is not that much evidence to support her. Stripping away the subtext, on a surface level the threat at hand is awesomely creepy, an enemy that is slowly walking toward its prey at all times. It might not be there today or tomorrow, but it will arrive eventually. Unfortunately though, the ‘rules’ of the threat are never fully established. Occasionally ‘it’ sort of just stops, and at others it seems to slightly cheat on the walking only policy. They are minor quibbles, but once that distract from the tightness of the film and its concept.

In terms of pacing, this is surprisingly slow, and a little patchy. It actually feels a little plotless to me, not functioning as a smooth long sweep of a story, but rather hopping from one incident to the next. Wait for ‘it’ to show up, scare the bejeesus out of you, move to a new location, ‘it’ shows up again. This is totally terrifying, but it also just feels aching for a richer incidence to the narrative. However director David Robert Mitchell is totally in control of his audience, deftly placing them where he wants them. I noticed one sequence where the dialogue felt especially stilted and the atmosphere had been sucked right out of the film. Then ‘it’ all of a sudden shows up and all of the atmosphere rushes back into the film with a greater force given that Mitchell had made you complacent with the preceding scene. The camerawork is a little over-done at times, especially a repeated fondness for the camera wheeling around in a wild circle. It’s a gimmicky, too funky touch that does nothing to dial up the tension. 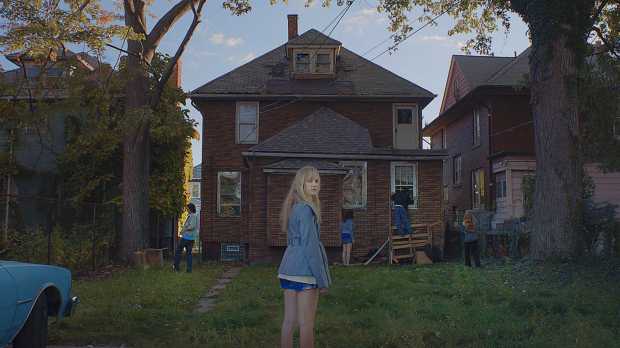 Whilst overall it is a little difficult to see why the film particularly necessitates the hype it has garnered (though as a fan of the genre I’m not complaining), there is no doubting there is a level of detail and artistry that sets It Follows apart. The look of the suburbia is just slightly off, adding to the whole vibe of the film. Little touches such as the furnishings all seemingly being a combination of retro and futuristic looking pieces for example. Whilst I would characterise the film is a very good one, I feel that the soundtrack is flat out great. The approach taken is a risky one and could have so easily distracted from the film or ‘signposted’ events a little too much. Instead the soundtrack by Disasterpeace lends a totally jarring and disconcerting backdrop to the imagery. In that way it is both a little similar and totally different, to Hans Zimmer’s score for Interstellar (2014). The score seems to assault you, not through sheer volume, but because there seems to be a raw physicality to it. It’s one of those soundtracks I rush straight home and look into if I buy a vinyl copy (turns out you can, though it’s a pretty limited run). The soundtrack feeds into what I would label the film’s denseness. Also fitting this mould is the incorporation of pieces of literature throughout, chiefly Dostoyevsky’s “The Idiot” and a parade of old sci-fi films on black and white telly. On a first viewing, it is hard to take in and incorporate exactly what is being said by these elements. But they function as nice window-dressing that I would like to unpack on a re-watch.

Verdict: It Follows is a really quite good and creepy as balls horror flick, albeit an overly hyped and definitely flawed one. However, if you have even the slightest interest in the use of soundtrack in film, it instantly rises to a must see experience. It may well end up being a modern classic in terms of horror soundtracks. Plus, get out there and support indie horror in cinemas. Stubby of Reschs

Related beermovie.net articles for you to check out: The Babadook and Patrick.