Australian horror film The Babadook (2014) has been gaining a fair bit of attention lately. From winning acclaim at international film festivals to securing a reasonable theatrical release in its home country, which is becoming increasingly rare, this is a film that has people talking. After a slow start, I think it is fair to say that writer director Jennifer Kent’s first feature film deserves absolutely everything that is said about it (assuming they are good that is). 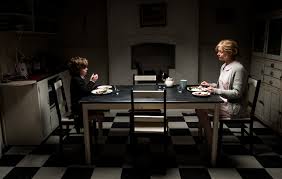 The film centres on a single mother Amelia, played by Essie Davis, and her son Samuel, played by Noah Wiseman. Samuel’s father died in a car accident as Amelia was being driven to the hospital to give birth to him.  Things are already going pretty rubbish for the family when the boy finds a book titled “The Babadook” on the shelf to read before bed. The book is amazing by the way and if they bought it out, I would snap up a copy for a prized piece of merch. Already scared of monsters, the starkly terrifying book reduces Samuel to a bawling, inconsolable mess. From there the horror part of the story really kicks in with the usual bumps in the night and aspects of the book playing out in real life. The film is really astutely made and because the tone and pacing are both so spot on, it makes it all the more terrifying. And believe me it is terrifying.  It’s a very different horror film too, with its stylish shooting style, being not at all visceral and clearly influenced by though not derivative of classic haunted house films.  Thematically, this is a very dark and adult horror film. It is not just about the supernatural threat to the physical body, but it also deals with grief in a very intelligent and interesting way. It is also one of the better examinations of the relationship between a mother and her child in a horror film that has been seen for quite a while.

There is so much texture in this film. The house where a lot of the action plays out has a lot of wood and a very gothic feel to it, the soundtrack and sound design both add so much without distracting at all, whilst the heavily focused on close-ups shooting style also brings a really different vibe to the film.  Essie Davis is well known to Aussie audiences for her role as Phryne Fisher in the TV series Miss Fisher’s Murder Mysteries. She is excellent as the 1920s sleuth in that series, but she is even better in this film. As a mother close to the edge, she totally embodies the role with her physical appearance and mannerisms. The film opens on a long close-up of her face, just being mad good at acting, and from then on you know you are in for a wonderful performance. She excels at both the grounded elements of the script, as a mother who just cannot take any more and is becoming increasingly exasperated with her son’s nightmares, and also at the scream laden supernatural aspects of it. The fact that Davis’ performance is so excellent is important because the arc of her character, her disintegration, is a very good narrative through line for the film. I was expecting Essie Davis to be as wonderful as she is, but a total surprise to me was the performance from young Noah Wiseman as Samuel. It is one of the more shocking performances from a young actor I have seen in quite a while. Part of that is because he is totally invested in the role and genuinely acting, not just playing along as himself. There are a couple of sequences where the character is putting on magic shows. And so excellent is Wiseman’s performance that he is able to act as the bad actor that the character would be… if that makes any sense. In any case, he is really good at everything, from making you believe he is an annoying brat, to a genuinely troubled kid, to mortally terrified.

I saw this film on my birthday, two beers in hand down at my local cinema. Aside from the fact it scared the shit out of me, it was a perfect present. A highly original and artistically made horror film from my home country that knocked my socks off. Here is hoping that the film is a big success and it leads to Kent being able to bring some more frightening tales to the screen. If you get the chance over the next couple of months to see it, jump at the chance.

Related beermovie.net articles for you to check out: Carrie (1974) and Patrick.