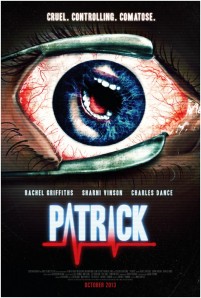 I have written in passing about the new Australian flick Patrick (2013) a couple of times on the blog recently, predominately focusing on the shabby cinema release it has received. I was lucky enough to catch the film when it played as part of the Canberra International Film Festival and now it is getting a limited run at Arc Cinema here in town, so hopefully more people will get the chance to check it out.

For those of you who are unaware, this is a remake of a 1978 Australian ‘ozploitation’ film of the same name. Patrick is a comatose patient confined to an asylum. One of them old school ones where the main doctor is menacing and does terrifying experiments on all his patients.  The film focuses on the rather special mental abilities Patrick possesses that he uses to wreak a little havoc and instil terror in those around him. The asylum is tightly run by Doctor Roget, played by Charles Dance and also by Matron Cassidy, played by Rachel Griffiths. Into this atmosphere comes a new, too nosey for her own good nurse named Kathy, played by Sharni Vinson. Patrick has a somewhat different pedigree to most remakes because of the director. Mark Hartley is best known for directing the documentary Not Quite Hollywood (2008) which is an ode to underappreciated classic ozploitation films. It is a little ironic then that this film looks set to join what I think is a really underappreciated batch of genre films in this country, that are getting nowhere near enough love from local audiences. 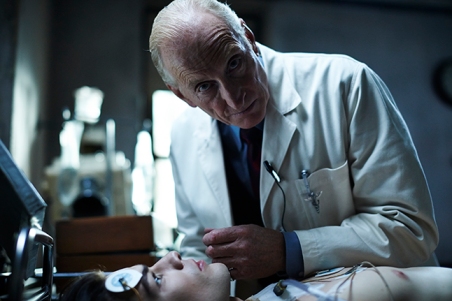 There is plenty of the schlockiness the trailer suggested in Patrick. But the film is not content to just rumble along doing that the whole time. It gets dark toward the end and I mean super dark. It is refreshing for an Aussie genre flick to not stay set in its ways the entire way through and to take the main characters some really interesting and unexpected places. One of the major positives for the film is the fact that, for me at least, it was genuinely scary. There were some good jump scares and also occasions of building the tension up to unbearable levels. There are moments of silliness that do break the mood, but looking back on the film, they definitely do not cloud my overall memories of it. Whilst not a haunted house film as such (or at all actually) the film takes place in pretty much a perfect haunted house setting. A majority of the action takes place inside the huge old asylum. It is so old that coupled with the design including costuming, tricks you into thinking this is a period piece for long stretches, when it is actually set in the present day. That sounds kind of awkward in theory, but the reality is that the setting and design really brings you into the world and atmosphere of the film and what it is trying to do. It takes an assured touch to clash elements like this – think iphones and old fashioned credits music – and have it actually deliver something to the film. That is a risk the film takes that pays off. There are other risks the film takes that are not so successful. There is a section involving a hand-job which falls to earth with a decided thud. I guess the intention was to have a big, totally absurd set piece. But unfortunately it was just a big absurd, unintentional laugh from the audience I saw this with. Having said that though, I will always go into a bat for a film that takes risks, even if they affect the overall quality of the film.

Despite being named for the main male character (who spends the entire film flat on his back comatose by the way), this is really Sharni Vinson’s film, with her new nurse at the asylum Kathy being the character whose journey we really go on. Hopefully given the success of You’re Next (2011) which was released this year, the presence of Vinson will ensure the film gets a fair workout on VOD internationally, or perhaps even a limited theatrical release. Just as in You’re Next, Vinson is really good here and she could easily spend the next few years of her career playing these roles very well. All the technical jazz here ranges from good to great. The film is beautifully shot. I am not sure what kind of budget they managed to muster for this, but there are no money deficiencies on show. There are some definite inconsistencies in the script. But most of it is really assured and the clunkiness is minimised. I think Hartley does a really good job with this film. You can tell he has an affection not just for the original film, but the form of old fashioned horror films more broadly and he brings that to bear on this. Importantly, he never lets that reverence get in the way of exploring new ground and his own creative channels. Which is a good thing, because the film could have easily been too stuffy given the narrative is a pretty simple one. 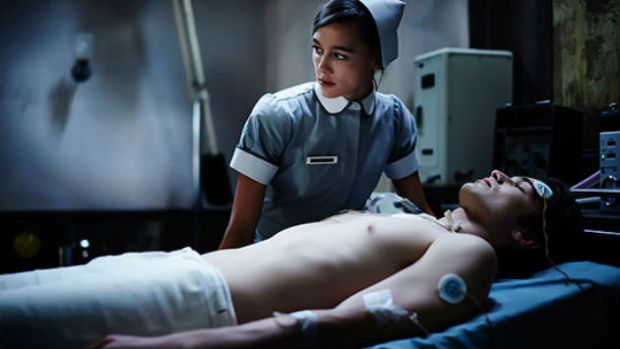 I haven’t seen the original Patrick so I cannot really compare the two efforts. But considered on its own terms, this film stands up as part of a growing canon of underappreciated canon of Australian genre work.  This is a fun combination of the schlocky and the really well crafted that will appeal to genre fans, or those who loved Vinson’s work in You’re Next.