As a fan of the works of people like Jack Kerouac and Woody Guthrie, especially his 1943 autobiography “Bound for Glory”, I was really keen to see Daniel Skaggs’ documentary Freeload (2014). With all of the popular accounts of riding the rails being at least 50 years old now, it is easy to imagine that the practice does not really exist anymore, but Skaggs brings us a window into this throwback lifestyle.

Even the best accounts of riding the rails are embellished with romanticism to a degree. Working with the immediacy of a pretty mobile camera and within the confines of the documentary structure, Freeload totally strips away any sense of this romanticism. That is not to say that the film is bleak, it just presents the good and the bad of the lifestyle without the need or desire for sentiment. Don’t expect to see a portrait of a bunch of down on their luck dudes, lamenting what life has brought them here. Most of those profiled by Skaggs have made this choice willingly, either for philosophical reasons or simply because they want no part of what the world has become. Who can blame them on that latter point? In fact the psychological insight that the film brings to the decision to ride the rails makes it feel like a pretty logical choice for the most part. The bad of their choice is not shirked from either and we see squalor, alcoholism and a griminess to the lifestyle in the film as well. They are also aware of the history of their lifestyle, of those who have made these choices in the past, whilst also being aware of the differences that separate them such as the fact that most of them are not looking for work, like many of those who were forced onto the rails used to. 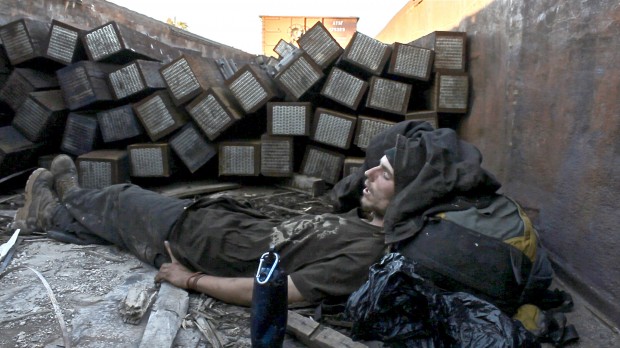 I would be amazed to see the practicalities of how Freeload was shot. Skaggs takes his camera into some really tight spots, spending long amounts of time in cramped and dangerous feeling places. So to do the rail riders’ dogs.  They all seem to have one, and these generally (though unfortunately not always) well loved dogs are clearly used to sitting still for their own safety.  Just like the shooting, the editing of the film is impressive as well. No doubt there were huge swathes of material shot and it is all condensed down into something coherent and broad ranging, without feeling slight. The way that the stories of the various people who are featured in the film are woven together to give a sense of an entire subculture does not feel forced at all and you still get a really good sense of who these people are as individuals.

Verdict: Freeload brings to life a way of living that is probably totally foreign to a vast majority of us. In borderline verite style, Skaggs has done this with an impressive lack of intervention or judgement, allowing these really interesting people and their choice to live this lifestyle speak for itself, good or bad. It’s great to see a film not obsessed with painting a lifestyle as either the depth of despair or a grand philosophical journey either. The film simply shows their way of being.  Pint of Kilkenny

Related beermovie.net articles for you to check out: SUFF 2014: Nova Express andSUFF 2014: Beckoning the Butcher.