I had revised levels of hope heading into Friday the 13th Part VIII: Jason Takes Manhattan (1989) given the two films that preceded it were some of the strongest in the series. Not only that, but Jason Voorhees rampaging through Manhattan sounds like an exceptional way to once again reinvigorate the slasher conventions that are so tired in many of this series’ films. 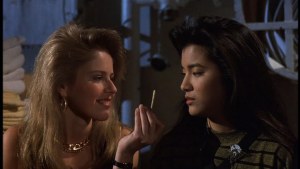 Unfortunately though, whilst not a total waste of time, this film is nowhere near as fun as the premise and title suggest it should be. Mainly because the action does not hit the big city until right near the end, and our hockey masked bad dude picking high school kids off on a boat does not feel as fresh as it should. Clearly ‘Jason on a Boat’ was not catchy enough a title so they have to trick us into thinking it mainly takes place in New York City. The first couple of shots are promising, situating the action very much in a big city and featuring a montage of rats, junkies and muggings. A real urban jungle that should be a really novel place for a film in this genre. It still would be, because from there the film spends a good hour in far less interesting locations. The film has some of that massive 80s-ness going on though. In this one it is quite endearing rather than just embarrassing. A girl with a killer guitar and a final showdown in a sewer, complete with toxic waste, scream 80s to me, rightly or wrongly.

As a lover of practical effects… this is rubbish

One thing that Jason Takes Manhattan does better than a majority of the other films in the series is deliver highly original kills (although they are too far apart). A guitar to the skull, a sauna rock to the guts and a good ol’ fashioned ripping off of the head are three of the delightful ways that teens meet their end in this one. The film though continues what I feel is a certain mean-spiritedness that reoccurs throughout the whole franchise. Victims are constantly set up as admirable, wise or on the verge of genuine happiness before being killed. Conversely the film makes some (genuinely tame and misguided) attempts to humanise Jason Voorhees. It is strongly intimated that he lets a potential victim go, after a very realist drugging and rape scene, which is probably the most intense thing in the franchise to date. Later, the utterly woeful practical effects and strange elephant noises that Jason makes during the film’s conclusion are meant to endear the character at least somewhat in the minds of the audience. Slasher films often do this with varying levels of success. I don’t know of one that has done it particularly successfully though, because no matter how the killers have been victimised, in the end they are out and about killing teenagers who have most of their lives ahead of them.

Far from being offensively terrible, Jason Takes Manhattan is above all just terribly formulaic when the dual settings of a boat and NYC should allow it to rise above the norm. But in this film the cool settings do not result in very much narrative flair which is a shame because the series did seem to be on the way up. In short, this is the best of the bad films in this really patchy quality-wise franchise.