One noticeable feature of the ultra-enjoyable Jason Lives: Friday the 13th Part VI (1986) was the incorporation of more supernatural elements than the series had featured up until that point. This film not only maintains that, but expands on it greatly, resulting in the strongest ‘final girl’ of the franchise so far. Initially the character of Tina Shepard feels like ‘Carrie White lite’, a nondescript teenage girl with the power of telekinesis that she cannot control as yet. The introduction of Tina is not promising. In one of her first scenes, she manages to reanimate Jason whilst her nose glows bright red… yes like Rudolph. However for the most part, her character provides something original for the film, interacting with what is a pretty cliché cabin in the woods partyin teens style set-up. Just as Tina provides the best central (non-Jason) character of the series, her love interest Nick is the best male teen character as well. There is a real care in his actions toward her and a genuineness to their interactions that is shockingly assured. This film and the previous one are less obsessed with mindless Jason murders and actually bother with a dash of story which is quite refreshing. They also get the tone both unique and right. Part VI had humour that hit the mark regularly whilst this one adds in a heap of supernatural elements and a main character that you genuinely care about. 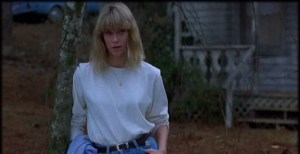 In many ways, Tina Shepard is the first real ‘final girl’ of the series. There is a point toward the end where she actually runs toward Jason to take him on, going full Carrie on his arse. For me it was one of the most rousing moments of the entire franchise. She was the first really strong and forceful female character that stuck with me from all of these films. I think it is a shame that they did not build more entries in the series around the character as she is the most fully formed character we have seen and brought to life well by Lar Park-Lincoln. The design of these films has rarely been something I have felt the need to comment on. Credit where it is due though, the design of Jason in this one is utterly badass. His shirt is ripped and his spine and the back of his ribs are showing, which really plays up the supernatural aspects of this somewhat new Jason.

The supernatural powers of the character of Tina are a real point of difference for this film and help to make this film comfortably the most satisfying of the series so far. I have to say, I didn’t think any of these films would be as compelling as this film. But not only is Friday the 13th Part VII: The New Blood one of the most compelling 80s slashers I have seen it is also one of the most downright fun to watch.