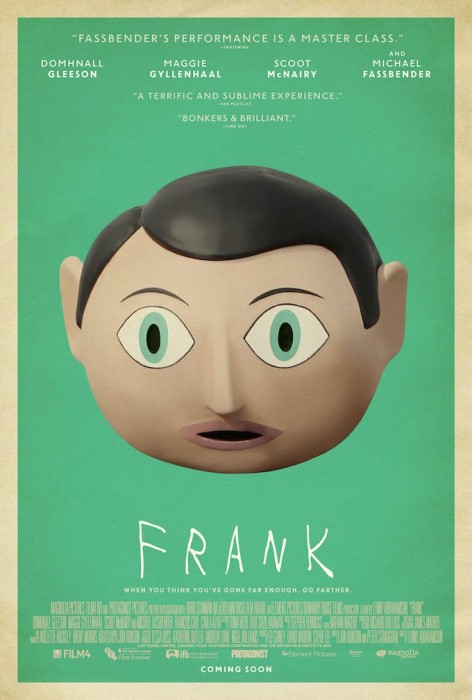 Frank, otherwise known as the Michael Fassbender in a giant papier mache head movie, is delightfully one of the weirder films that will hit (kinda)mainstream cinemas this year. Which is kind of good, because anything less than that level of weirdness would have been a bit of a let-down given all the giant head stuff going on.

You wouldn’t know it from the marketing material, but Fassbender’s Frank is not really the film’s protagonist, or at least not the audience’s window into the film. That would be Jon, played by Domhnall Gleeson, a struggling songwriter and keyboard player who lands himself a one-off gig with Frank’s band. The gig does not exactly go well, but a few weeks later Jon finds himself working on an album with the band in an isolated Scottish wilderness. Jon’s journey is one about the desire and passion to do well and is also very much about the creative process. It is something that must be laboured at, but it also requires a certain ‘magical’ spark to ignite that work. One of the great strengths of the film is that it does a good job of telling this journey, whilst also establishing quite different ones for other characters. I was a little taken aback by just how funny Frank was because for some reason I thought the film was a drama. I laughed more in the first half of this film than I have watching any other 2014 release, with its array of really clever scriptwriting and a fair splash of over the top idiocy too. It is so refreshing to see an indie film (whatever that means these days) be unafraid to trade in a little jauntiness and rambunctiousness to accompany its brooding. It is a shame then, that the more serious second half is not quite as successful as the more straight up comedy of the first. Part of this is the imposition of something approaching a traditional ‘final act’ onto the film where the stronger earlier half of the film was not really concerned with story as such. 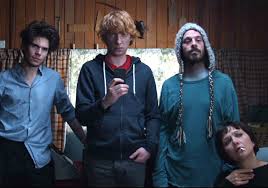 The rest of Frank’s band

As well as being hilarious, aspects of Frank are quite serious and dark. The second half of the film, set predominately around the SXSW festival brings the themes of the creative process and ‘selling out’, to their more serious conclusion. Not only more serious, but a little more familiar as well. Some of the beats here are ones that it seems every single band biopic needs to hit, even if this does hit some of them with more originality than most. On the ‘dark’ front, Scoot McNairy spearheads a subplot of a man struggling to subdue his sexual urges to “fuck mannequins.” This subplot was confronting but simultaneously both funny and boundary pushing. It got me pondering what passes as bold or crass comedy in cinema these days. Every film that thinks dropping a rape joke in a film makes it edgy (which is close to every comedy I’ve seen this year), should watch Frank for a lesson in how to push the boundaries, be uncompromising in your film and not resort to utter crassness or offensiveness. The ending is both dark and serious, engaging in the theme of mental illness in a way that is thoughtful but also perhaps the slightest bit unsatisfying. As a big fan of Monsters (2010) it has been awesome to see Scoot McNairy in not one, but two films of late. He appeared in The Rover (2014) as well as this film. Hopefully we keep seeing more of him, because at the very least he is a really effective supporting character actor and creates something pretty complex in this film with his limited screen time. Domhnall Gleeson continues to hone his somewhat malleable onscreen presence, which I think works in this role and it also helps you forget this is Brendan Gleeson’s son. The much-written about performance from Fassbender is downright impressive as well, conveying so much through his voice and occasional tics underneath that giant head.

It is always so lovely to see a distinctive and weird film garner both buzz and a decent release. Sure having a gimmicky papier mache head containing Fassbender helped. But Frank is much more than just that and is especially worth checking out in a year that is shaping as being pretty devoid of decent comedies. It also culminates in a rousing musical moment that is like no other.

Related beermovie.net articles for you to check out: Searching for Sugarman and Hold Me While I’m Naked.