Friday the 13th: The Final Chapter

So Cory Feldman at the end of Friday the 13th: The Final Chapter… erm… what?

It was my hope when starting Friday the 13th: The Final Chapter (1984) that this series would turn out to be the inverse of the Elm Street films. That is, whereas with that series the odd numbered films were far and away better than the others, hopefully with this series it would be the even numbered ones. And that is true to a degree. The even numbered Friday the 13th films are at least moderately enjoyable, unfortunately the same cannot be said for the rest of them. There is also not really a centred marketing approach or narrative through line in these films like the Elm Street ones. The DVD edition I have of this is actually quite comical. The front obviously has the title Friday the 13th: The Final Chapter on it, whilst the first sentence on the back goes to lengths to explain that this is “the fourth – but not final” film in the series. Say what now? 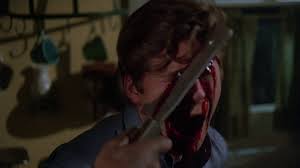 The issue with this series for me is the sheer lack of ambition. Whilst I quite enjoy Friday the 13th: The Final Chapter, there is very little that feels like it has not just come straight from all the other films. Though there is a brief revenge sub-plot that does actually feel new. But it is almost comical just how quickly that is dispensed with. Even though I bag the plot and repetitiveness of these films, this is better than most of them in that regard. I really like the start of the film, as the fuzz and ambos clean up after Jason’s rampage in the previous film on a delightfully dark and rainy night. Then it moves onto a really atmospheric section in a hospital. And let’s face it, outside of an isolated cabin in the woods, a hospital is about as excellent a slasher setting as you can get. But from that point on, the film settles back into what is essentially the exact same plot as the first few films – teens sexing and Jason killing. Unfortunately you can’t help but thinking that if the film had of been based more on the revenge sub-plot I mentioned earlier, told from that point of view, this would have been a much more interesting watch.

I don’t really have any issue with films following a formula. Hell, I am a James Bond nut. But these really should build up more of a sense of both story and character. In each film, the first 45 minutes are achingly slow and not much at all happens. This is where there should be slather of atmosphere and character interactions built. But each film meanders along, not really doing anything until the killing kicks off in the second half. Nostalgia wise, Friday the 13th: The Final Chapter delivers a couple of classic appearances on the cast. Both Cory Feldman and Crispin Glover appear. The film really has to be seen for Glover’s dance moves at one point which are essentially the 80s distilled into a bite size morsel for you. As for Feldman… well wow. If you have seen this film, that sentence will probably be pretty self explanatory. If you haven’t though, let me just explain that it involves a half cocked head shaving sequence to kill the big bad. It is all rather woeful, albeit with a brutal kill at the end. And it has to be said that the very last shot, with creepy sorta bald Feldman, is exceptionally badass. 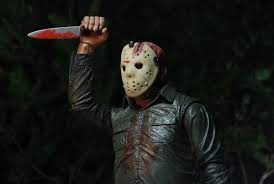 Unfortunately Friday the 13th: The Final Chapter sees this series continue on a pretty painfully formulaic run. Fortunately though, despite that, the film is enjoyable enough. It is not going to wow you, but it will give you 90 minutes of pretty mindless escapism. And there are worse things in the world than that.