Trailer for your Weekend: The Double 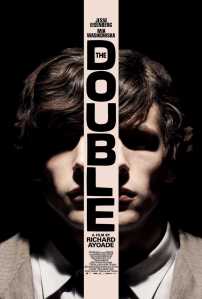 After stumbling upon the trailer for Enemy (2013) last week, I thought this week I would share the trailer for the rather more hyped doppelganger film to be released this year, Richard Ayoade’s The Double (2014). I have not really seen any of Ayoade’s work but plenty of people are really keen on his artistic vision. In terms of the cast, Jesse Eisenberg rarely impresses me, but I think Mia Wasikowska is one of the best actresses working at the moment and I enjoy her performances even in films that  I don’t care for such as Stoker (2013). As for this film, I am a little pessimistic. It looks a little weird tonally and actually reminded me of Tery Gilliam’s Brazil (1985). That kind of shtick is difficult to maintain over the course of a whole film. Having said that, the central notion is one that could make a great film, being a great mix of the relateable and the fantastical. Imagine what you would go through if all of a sudden your doppelganger showed up as a colleague. Hopefully the director can take it some interesting places.

Related beermovie.net articles: Trailer for your Weekend: Enemy and Now You See Me