I’ll get this out of the way early: Jean-Pierre Jeunet’s Delicatessen (1991) is utterly bloody absurd. Any film that promotes vegetarian freedom fighters in the promotional material is more than fine by me. This film wanders and winds its way to that end. At times it is brilliant, at times far too oblique, but it is always pretty interesting to sit and watch.

Set in a post-apocalyptic future of some sort Delicatessen takes place in a pretty miserable society where food is extremely rare. So rare that a butcher has resorted to knocking off people to maintain stock in his shop. The world that Jeunet has created is a strange, absurdist, failed industrialist one which manages to combine whimsy and grime in its makeup. There is not a whole lot of plot through the early running. It is more about establishing the tone, imagery and vibe of the whole situation. The plot that there is focuses on a new tenant in an apartment block above the butcher. He is the jack of all trades, and all is going relatively swimmingly. Especially when he begins a tender relationship with the butcher’s daughter. Trouble does appear on the horizon however with the cannibalistic father running low of meat for the butcher’s shop. That is where the vego freedom fighters come in. The film ends exceptionally well. It is a shame then that there is so much kerfuffle for a stretch beforehand that it is near impossible to establish what is going on.

Much of the futuristic aspect of the film is conveyed through the really bold way in which it is shot. It is nothing too over the top, but everything just feels slightly different. There are plenty of angles you don’t often see and the shot length is similarly unique, a touch closer to your average. Actually this shooting and the design of the film was extremely reminiscent of Terry Gilliam’s Brazil (1985) which is a good touch point for knowing what you will be getting yourself in for if you give this a shot. As the butcher’s daughter and protagonist’s love interest Julie, Marie-Laure Dougnac gives the pick of the performances. Perhaps partly as a result, hers is also the most interesting character, especially the breakdown of her relationship with her murderous father. However outside of her, the characters don’t really stand out as individuals. The script does not let the audience in to get to know them. 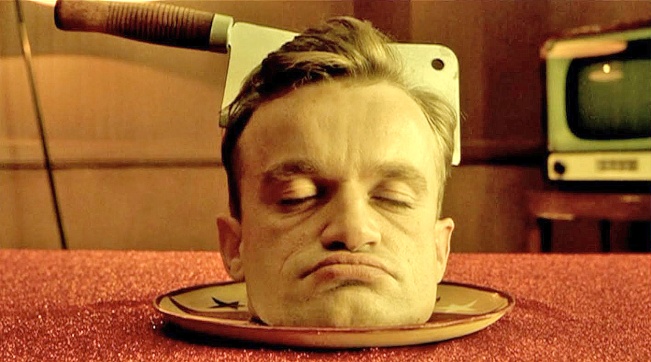 There is no doubt that Delicatessen is a good film, but it is a little too scattershot to succeed entirely. Like any film such as this, there will be plenty of this you love, some that won’t move you as much. For me, the imagery was a real joy as was some of the absurdity. Would have just been nice if the narrative was a little clearer throughout.