I have been having a lot of issues with my internet of late, plus I have also been away a lot (and am heading off again tomorrow), so I have been a little quiet with my writing and reading of other folks work, so sorry about that. Seem to have found a small window of slooooow internet though, so thought I would chuck this review up. 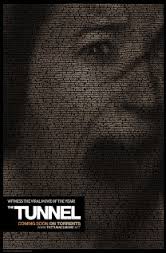 Australian horror flick The Tunnel (2011) got a lot of attention both here and internationally during its conception. Whilst it may not appear so innovative now only a few years removed, some of the tactics adopted by the producers of the film to get it off the ground and get it seen by as many people as possible, were pretty groundbreaking. Before crowd-sourcing was really a thing, they attempted to essentially crowd-source this film by selling of each frame of the film for a dollar. Whilst they did not end up selling all the frames they required, this approach got them enough notice to ensure sufficient funding was forthcoming to complete the film. Outside of that, the distribution model that was taken, and that continues to get the film out there, has ensured that the film has been seen by far more people than would have otherwise been the case. The film can be downloaded legally for free through a number of file sharing services, the film’s official website, watched on a number of VOD platforms, or purchased on DVD or Blu-ray (I personally took the Blu-ray option). I think these kind of left of centre approaches are becoming more common, which I think is great to see. I also think that as these approaches are used more and more they will become more refined and hopefully help smaller filmmakers cover the costs of their film and turn enough of a profit to ensure they can make their next one.

Outside of all that though, does The Tunnel actually work as a horror film? I say most definitely.  The film starts slowly, struggling early on to get over the top of some of the more average performances and getting sucked into some of the trappings of its chosen mockumentary style. After this flat opening though, the action ramps up and the film turns into one of the more tense and frightening local horror films (or just horror films in general) that I have seen in recent times. The plot sees the NSW government planning to use the abandoned network of tunnels underneath Sydney for a water recycling plant. Suspicions are raised amongst the media however when for some reason, the Government simply drops the idea with no explanation whatsoever. Rumours abound as to the reasons why, including that homeless people who live in the tunnels for shelter have been disappearing at an alarming rate. To investigate, a news crew sets off below ground to investigate what the hell is taking place underneath the train network of Sydney.

For starters, how bloody amazing is a network of abandoned tunnels as a setting for a horror film? Instant atmosphere right there. The film makes good use of it as well, without ever really being cheap about it. There are some spectacular scares in this film. It is best at creating tension, using atmosphere and action onscreen to have you freaking out a bit at what is to come next. Perhaps through the first half the film is a little better at creating this tension than actually delivering on it. But that changes throughout the latter part of the film, with the conclusion and last 15-20 minutes being especially satisfying. I was concerned that the action and tension would disappear when the true nature of the sinister force below the surface was revealed. The filmmakers though use this to their advantage and if anything make things tenser following the reveal. Whilst I have written before about how tired the mockumentary genre can get, The Tunnel does a pretty good job of keeping it fresh. It is helped by the fact that those taking the footage are a news crew, which is something a little different and it also gives those in the action a reason to comment on it, without having it feel too contrived. There are also interviews with a couple of those who were involved which helps to break up the shaky-cam (which actually isn’t too prevalent in any case). The performances are all good from the main cast members, however none of these performances is the real focus. Rather they are there to serve the creation of tension and fear, and they manage that. First time feature director Carlo Ledesma brings a lot to this film though. It is not a film that is entirely straightforward to marshal and convey, but Ledesma does a very good job.

Insanely tense with some awesome scares The Tunnel is highly recommended for aficionados of low-budget horror. It will perhaps not win over too many from outside that fan base, but as an example of what can be created when driven and innovative people put their mind to it, it is really excellent.