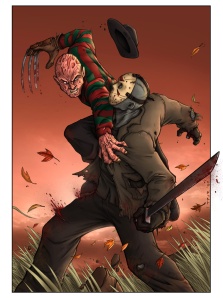 I recently stumbled across the Sixty Second Slashers Youtube account and have been having some fun checking out their work. So I thought I would share the love with you guys, thought some of you might get a kick out of it.

Many (but by no means all) great short films are just a single idea executed really well. Sixty Second Slashers takes that notion as far as it will go by delivering, you guessed it, slasher films that take place in a single minute. It is a great concept, to strip away all the artifice and just get these genre flicks right back to their core. I am not really sure who the folks behind the series of films are, but they really know their stuff cause the production values are pretty spot on.

Occasionally it does not entirely work. That is to be expected when you pin all your hopes on a single idea. When that one idea is not as sharp as it could be the film obviously suffers. There is a comedic slant to most of the films, which occasionally hits but definitely misses on occasions. But more often than not, these guys pull their concept off pretty well and there is some fun to be had watching these.

Enough of my rambling, here are my top three Sixty Second Slashers (there are currently 11 of these up on their Youtube account as well as a longer, The ABCs of Death 2 entry). Let me know what you think of these in the comments section below.

#3: Final Girl – This one actually manages to pack a fair bit of story into a very short package.

#2: Broken Fantasy – There is a cool tone to this one. It is light, but doesn’t feel the need to go OTT with the comedy.

#1: Back to the Post-Apocalypse – My favourite of the lot, and a good illustration of the power of a single good idea – in this case, a skype slasher.

Over this fortnight, you have the chance to win an as yet unconfirmed (but definitely choice) prize courtesy of Madman Entertainment, so be sure to get liking and commenting to go into the draw. Check out all the details here.