The first guest post for this week comes from Jon Fisher, a very good friend of mine. Here he turns his focus onto the fantastic young Australian horror director James Wan.

Horror has always enjoyed a love/hate relationship with movie audiences. Because of their cost-effectiveness and inbuilt audience (hardcore fans and teenagers), in any given year there’s guaranteed to be a dozen or more horror titles. Most of them are made on autopilot, with plots and characters cobbled together from any number of clichés. Some are more memorable, tapping into humans’ natural trepidation with things that fall into the Uncanny Valley – events or beings that confuse our brain as to whether or not danger is present or not. The most enjoyable and interesting horror films try to present the supernatural as living exclusively in the Uncanny Valley. Inanimate objects that appear to move of their own accord, malevolent demons that come from somewhere… else, with dubious motivations; bumps in the night, in short, spook the hell out of us.

In the era before movies (and certainly before the era of modern Western hyper-rationality), ghost stories were widely believed, and even specific locations avoided by communities because of the supernatural mischief-makers supposedly lurking within. (I once stayed in a country town in which seemingly all of the town’s 3,000-strong population would change their route to avoid walking past an old mansion in which they swear any entrant would receive what they called a ‘ghost-massage’).

Rationality, of course, ruins the fun. Every time any thinking person hears a so-called ‘expert’ in a horror movie babble on about the occult as if there was a body of empirical evidence to back up what they’re saying, the illusion is busted. Think of the ghost hunter in Paranormal Activity (2007), who floats in and out of the haunted house with the air of a prize-winning economist. The challenge of making a really good horror movie is to present material that is, innately, completely irrational, and yet still manage to convince audiences that it’s creepy.

The films of James Wan are informed by all of this – a deep familiarity with the Uncanny Valley, an appreciation for the schlock and inherent silliness of the horror genre, as well as an understanding that such subject material, if treated the right way, can engage audiences as well as creep them out. And that is, truly, what Wan’s films try to do – give us the creeps. It’s regrettable that his breakthrough hit Saw (2004) is seen as the film that ushered in the filthy torture-porn renaissance of the middle of last decade, because Saw relied far more on manipulation of the human psyche than on explicit torture. 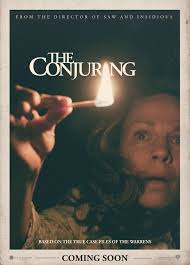 After a dodgy middle period (including Dead Silence (2007) which bordered on self-parody), James Wan has been active again over the last two years, with Insidious (2011) and The Conjuring (2013) arriving in relatively quick succession. The films act as sort of companion pieces to each other. Both are about a young family moving into a classic haunted house, full of high-ceilinged bedrooms, secret passageways, ominous basements and an endless supply of nooks and crannies. Both movies linger ever-so-slightly on the ‘technical’ gibberish that surrounds ghost whispering and paranormal investigation (the sombre lectures given by Ed and Lorraine Warren in The Conjurer, the humorous squirting machine methodically employed by Leigh Whanell’s character in Insidious). The Conjuring even discloses to us, in the pre-credits, that it is ‘based on the true story’, although it’s not clear if it means that in a Coen Brothers Fargo sense or a Texas Chainsaw Massacre sense.

I’m not aware of whether James Wan believes in ghosts or if he just believes in ghost movies. Regardless, he approaches the material with a plethora of enthusiasm and verve. His manipulation of the Uncanny Valley is first-rate – the weird prologue of The Conjuring about a possessed doll; a game of ‘hide-and-clap’ in which a poltergeist decides to mess with the homeowner.

Occasionally Wan’s work is amusingly derivative (i.e. the toothless crone waiting on top of a dresser), other times it is outstandingly stylish – the final shot of The Conjuring, for instance, is tense, suspenseful, and beautifully timed. Much of the set-up of Insidious is artfully crafted. Sometimes, though, Wan almost ratchets the tension up too high; so high that the scene can’t be resolved satisfactorily. Take, for instance, the slow-burning scene in The Conjuring in which a child wakes up his sibling, insisting that something is standing next to the door. The scene builds and builds beautifully, but how does it end? With nothing more than the slam of a door.

Which highlights another issue with Wan’s films; the repetition. Maybe there just isn’t enough meat on the bones of his screenplays to warrant a two-hour feature. Wan injects both Insidious and The Conjurer with at least the semblance of an emotional arc, but usually the relationships between the characters are suggested rather than explored. We understand the sentiment in The Conjurer when Ed tells Lorraine he can’t let her join him in an exorcism because of the danger posed, but only in an abstract sense. Ditto the pain that Josh Lambert feels in Insidious about his family’s crumbling dynamics, so much so to the point he returns late at night just to avoid them.

In the midst of all that, there are sequences in Insidious and The Conjuring that work on their own terms so well. Are such moments worth the price of admission? Do our expectations of how much movies can achieve emotionally automatically lower simply because they belong to the genre of horror?

Viewers probably know if they are likely to enjoy a James Wan movie. Those who won’t find anything to enjoy in his work are probably the sort of person who hates any sort of horror film. But for those that are willing to suspend some disbelief, to give the material a chance and who have a relatively firm constitution, movies like Insidious and The Conjuring are a breath of fresh air compared to the dreck of horror movies normally shoved down the general public’s collective throat. All else aside, it is fair to state that if you are a squeamish person, James Wan makes movies that are likely to make you squeam.

Jon formerly wrote The Film Brief website and hosted a podcast of the same name (with me as his co-host). You can now find Jon’s latest work at Wide Angle Iris, a site he runs with the talented Rollie Schott. Be sure to check out their stuff over at that site.

Also don’t forget that over this fortnight, you have the chance to win an as yet unconfirmed (but definitely choice) prize courtesy of Madman Entertainment, so be sure to get liking and commenting to go into the draw. Check out all the details here.