Trailer for your Weekend: Edge of Tomorrow 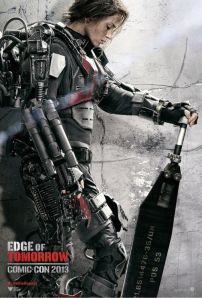 We all know you can’t judge a film by its trailer. Hopefully for the makers of Edge of Tomorrow, that proves accurate in this case. Starring Emily Blunt and Tom Cruise, this film is aiming to be a big budget breakout film this year. And whilst there is a lot of potential in the cast and plot, I am not a fan of what they have chosen to show us in this trailer. Whilst I think the music choices made throughout are pretty gnarly, I don’t like the convoluted conveying of the narrative. Not a good sign when the story is confusing in the trailer. The other issue is whether the film will be differentiating it from other similar films of recent years. There are hints of Source Code (2011), Elysium (2013) and perhaps even Pacific Rim (2013) in the trailer and those marketing the film would be wise to start showing some truly original content to potential attendees of the film. What do you guys think about this one?

Unfortunately, having Werner Herzog as villain was not quite enough to save Werner as Villain for me. Nope, not even the most inspired piece of casting I can recall saves this film from its flaws. Things start relatively promisingly too, with a brutal opening featuring an indiscriminate sniper attack. Also, Richard Jenkins shows up and I do love me some Richard Jenkins. But before too long the really shitty script begins to make itself known and takes things over. Tom Cruise shows up too, bringing very little with him to be honest. He is meant to be a total badass, but he just couldn’t pull it off. He just has this really smarmy presence, which is weird because I thought that Reacher was meant to be more of a salt of the earth, ‘everyman’ type of guy (that was definitely the impression I got from the only Reacher novel I read). The only couple of good moments were included in the trailer, leaving essentially the only reason to watch the movie the fact that Werner Herzog is the villain. The film is just so bloody long too. Seriously, a film like this really only needs to be 90 minutes or so, but this just keeps stretching out far over the 2 hour mark.

Just to be clear though, the fact that this Werner Herzog as Villain has Werner Herzog playing the bad guy is as incredible in practice as it is in theory. His Herzogian voice just makes for such an iconic character and he brings something decidedly disconcerting to the role. Herzog has a cracking villain face as well and his character works well. Because if anyone can play a character who ate his own fingers and make it seem believable, it is Werner Herzog (we’re talking about a man who once ate his own frickin shoe). Herzog genuinely brings an intensity to proceedings that is sorely lacking from the rest of the film. If only Tom Cruise in the titular role brought anywhere near that level of presence. Indeed, the only other actor who is on Herzog’s level in this film is the charismatic young Aussie Jai Courtney as his main henchman. This is the first role I have seen Courtney in, but let’s just say I was very impressed, and it gives me a lot of hope for his upcoming turn as John McClane’s son in A Good Day to Die Hard (2013). 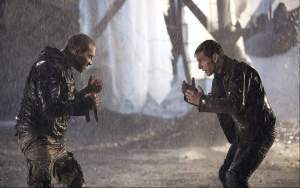 Courtney and Cruise about to throw down

If you are a huge Werner Herzog fan like me, Werner Herzog as Villain is probably worth your while. Even then, just wait for it on Blu-ray and in all seriousness you could just fast forward through any scenes not featuring Herzog and you would not miss much. For everyone else though, don’t even bother at all. The woeful script and general averageness of the rest of it does not really make it worth the effort.

Trailer for your Weekend: Oblivion

Coming hot on the heels of last week’s awesome sci-fi trailer comes this one for Oblivion. Taking the old Planet of the Apes conceit of showing today’s icons in their future dilapidated state seems to be the focus and it looks awesome. Well the beaten up old stuff looks cool. What does not look as good to me is the human side of things. Some pretty questionable dialogue and cringeworthy moments in this.

Hopefully it sticks to a real sci-fi centric approach though, because this looks as though it has the budget and visual punch to be something quite cool.