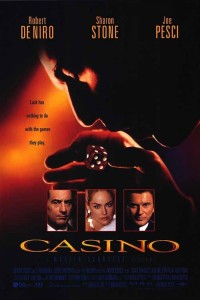 Perhaps no American director seems to have created more cinephiles than Martin Scorsese. I have never been his most ardent fan though, generally liking rather than loving most of his work. But he’s also one I feel I need to continually revisit to see if I will ever find the spark of genius that so many others find.

The plot of Casino (1995) sees Robert De Niro playing up and coming member of the mob Sam ‘Ace’ Rothstein, making his way in the world of organised crime. An advanced party for the organisation’s tentative excursions into Las Vegas. He runs a casino which in turn funnels huge sums of money back to his superiors. Ace’s mission is complicated by having to keep an erratic, violence prone, ‘made’ (unlike De Niro) member of the mob Nicky Santoro (played by Joe Pesci), in some kind of check. All sound pretty familiar? That’s because Casino is painfully similar to Goodfellas (1990). So close it could be a remake. The grand sweep of the arc is the same, the ups and downs, machinations of the mob and a focus on ‘street level guys’ all reappear. The films mainly look the same and many of the same actors appear. Even specific plot beats echo loudly from one film to the other. There are some slight differences – the love triangle dynamic is well set up here involving Sharon Stone’s Ginger McKenna, and the notion of a film structured like an American epic but really only being about a casino intrigues for a little while. But the similarities certainly consume any tangible differences. In addition to these similarities, the film also loses its narrative core regularly along the way, feeling too vague. Some of the story elements, Ginger’s drug habit for example, are really muddled in the way they are conveyed, which lessens the impact of that part of the story.

Style wise, Casino does not do a whole lot out of the ordinary, and what it does is a mixed bag. The duelling voiceovers are tiresome and the cutesy stuff such as ‘back home years ago’ subtitles are ineffective. But there is a gaudiness to the colours that Scorsese employs well, helping the glitz and seediness of Las Vegas pop off the screen. Similarly the performances range from the disappointing, to the stock standard to occasionally good. Pesci is perhaps the best of them all. I don’t really care for his character, it’s basically the exact same little wired psychopath vibe we’ve seen before. But he performs it very astutely, becoming the focal point of the scenes he is in. At the other end of the scale, particularly in terms of the writing of the character, but also performance wise is Sharon Stone. The film asserts that she is “the most charming woman you ever saw”, but at no point does that come out. Stone plays Ginger as a blank slate and neither the writing or the performance gives us any clue as to why she becomes such a contested part of the story.

Verdict: In the end, I feel the same about Casino as I do about a lot of Scorsese films. It is a fine, watchable experience. But ultimately a pretty hollow one. For me, the film does not have anything to say and it is further weakened by being essentially the exact same film as Goodfellas. Stubby of Reschs

Related beermovie.net articles for you to check out: The Wolf of Wall Street and The House of Caine: Get Carter.