There are plenty of good spoiler-free reviews for the film doing the rounds including from Drew McWeeney at Hitfix, Matt Singer at Screencrush, Jen Yamato at The Daily Beast and Eric Vespe at Aint it Cool news among many others. This is not one of them though. I didn’t really feel I could write a substantial review without going into details. So just in case the title did not make this clear, this review contains spoilers for Star Wars: The Force Awakens (2015). Do not read until after you have seen the film, or unless you don’t really care about having it spoiled. Feel free to discuss spoilers in the comments below now I’ve given the warning for those who need it.

One more warning. Spoilers coming your way after this poster.

Headline statement: I quite liked it and I think major Star Wars fans will love it. So don’t let anything take I say take away from that. And whilst I had an absolute blast watching it in my early morning session at the cinema, the further away I get from the film, the more its issues dominate in my mind. Basically for this mild fan of the franchise, it was a good but definitely not great experience.  There are plenty scripting issues. It’s exposition heavy and the story totally plods along, taking far too much time. And frankly it feels like a remake at times so often have we seen a lot of these story moments. This is perhaps my major issue. The story, despite some different dressing, is the Death Star take 3. Nothing about the plot feels new with one or two exceptions. I have heard a number of people liken this to Creed (2015). I get the comparison, but for me it’s off the mark. Sure Creed has a similar structure to the earlier Rocky films. But it puts much more of a new spin on them, rather than rehashing large tracts of them wholesale. On the plus side for the script, I did think that the humour was a real strong suit. BB-8 will be a marketer’s dream and Abrams keeps the kiddiness in check. Abrams is also much better at characters than Lucas and it is the new characters that stick with you. Not such a bad thing for a continuing franchise. Daisy Ridley’s Rey is a hero I hope to see in more films, whilst John Boyega’s Finn has a really fresh arc that I don’t think we have seen before. A defecting Stormtrooper adds depth to his part and is something genuinely new. The performances overall are good. I thought both Oscar Isaac and Carrie Fisher were excellent, though much under-used. Harrison Ford’s Han Solo is the real lead from the old guard, and he is having fun here and not phoning  it in at all.

This brings us to the elephant in the room. Luke Skywalker is not in this film. Well he is, but for legitimately less than a minute. That feels a little cheap given the marketing push around the stars of the original trilogy return. I will be utterly intrigued as to how this is received amongst Star Wars fandom. Feels like we were promised something that was not delivered. Even for me, this was a major negative as the continued wish to have him injected into the action failed to materialise. This is all coming off a bit negative, and there were lots of things I did enjoy.  John Williams does his Star Wars thing and it a really impressive accompaniment to the action. It’s comfortably the best looking film of the series, as it should be. The ships are great, though I could have used more dogfighting action. The action that is there was perhaps not integrated into the stakes of the story as good as it could have been. Definitely on the plus side was the establishment of the villainous First Order. Adam Driver’s Kylo Ren is a bit of a dud. Well he looks cool and it’s  a good performance. But again, this feels like a total rehash. He’s Han and Leia’s son, and all the same family issues from the original trilogy come to the fore. But I like the fact that there are three main villains and that there are factions and ruptures amongst them. It will be interesting to see how Ren and Domhnall Gleeson’s General Hux interact in the next couple of entries. 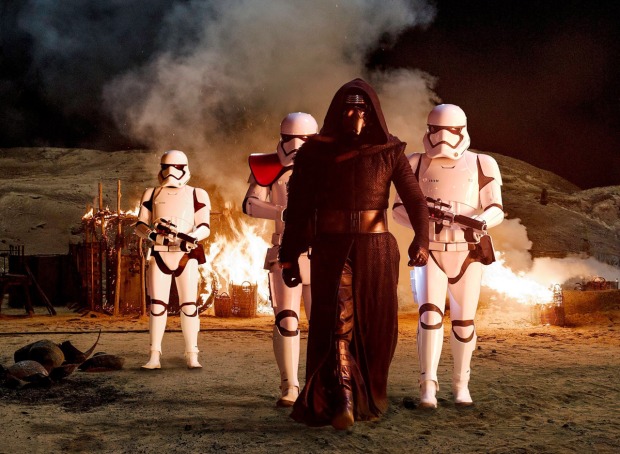 Verdict: In the end the story for The Force Awakens was lacking for me, as was the freshness.  You know, caught up in the moment, I had a blast. As I reflect back on it, I think it’s a little underwhelming. But the film does leave the series in a good place for Episodes 8 and 9 to launch from, especially with the new characters and the First Order well established. Stubby of Reschs

Related beermovie.net articles for you to check out: Avengers: Age of Ultron and  A Trip to the Moon.