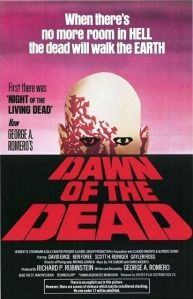 George A. Romero’s ‘Dead’ series of zombie films with a side of social commentary are about as beloved as classic horror gets. Perhaps none more so than the second in the series Dawn of the Dead (1978) which arrived a round decade after the decidedly more lo-fi Night of the Living Dead (1968).

Unfortunately for me, a little something got lost in that decade. There is much to admire in the ideas and devices of the film, but not all that much to truly enjoy. The environment is chaotic from the start. Initially that chaos is restricted to a TV studio and then, for the majority of the film, a mall. In theory there should be a nice flow of the chaos being restricted, then spiralling out, then being restricted again. But in reality, it’s a little boring, which a zombie apocalypse in the mall outing has no excuse for. The plot is high concept in that it really is just a small band of folk trying to turn back the zombie hordes in a confined space. In execution though, Dawn of the Dead lacks storytelling clarity. In addition to the lack of a clear destination for the characters to be working toward, the aims and stakes of individual sequences are never well articulated. There is a big long set piece involving a bunch of trucks at one point. But it is never explained exactly what the characters are trying to achieve with this daring operation and why they are making the decisions they do. These elements are all the more frustrating because the best moments of the film are the characters carrying out well articulated pieces of minutiae such as body disposals or building walls to barricade themselves.  Neither is the film able to give a sense of the scale of the outbreak in a worldwide or even USA-wide way. It is very much operating on the micro level with no attention paid to the status of the macro struggle. This leads to the trajectory of the plot being ultimately far too flat. 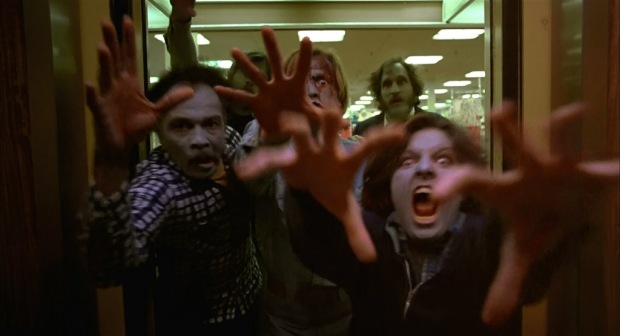 So sure aspects of it look cool, but to what end. Early on there are some nice moments toying with the idea of how since the events of the first film, the zombie horde has very much become a part of daily human life. Blokes hang around drinking and taking pot-shots at their undead brethren. Romero really does not seem to have an eye for shooting or constructing action. The film is nothing particularly creative to look at in these sequences and just lumbers along. Perhaps in part that can be blamed on the fact that the lack of speed in the zombies is really apparent, muting the fear they should inspire. The main positive of the gnarly gore is in the end not enough to overcome the unshakeable sense that this is an aimless and plotless venture. Italian Giallo maestro Dario Argento had some level of involvement with the film. Goblin provide the soundtrack and initially there is a definite influence of Giallo in the stylistic approach of the film. That had me very excited for something left of centre, but the arthouse chops faded quite quickly. The soundtrack endures a little better though, and I am a big fan of it. This is kinda understated Goblin, vibey but not overly intrusive. The effects of the film are a mixed bag. The bloodiness and gore elicit most of the reaction that the film brings. But the dull greyness of the makeup is not much chop at all to look at.  There is a continuation of a number of themes from the first film, with social commentary on racial tolerance and classism popping up. The setting also influences the themes, with commentary on capitalism, on greed and the inability to share a bounty. The destruction of a department store standing in for the breakdown of capitalism, zombie consumers being mindlessly drawn back to this shopping palace. But whilst these work ok in isolation, they do not feed into the main plotline of the film or vice versa.

Verdict: There is a reasonable amount to like in the sheer violence and social commentary of Dawn of the Dead. But it underwhelms on most storytelling fronts, remaining aimless to the very end, to such an extent that this horror classic is a major disappointment.  Schooner of Carlton Draught

Related beermovie.net articles for you to check out: Night of the Living Dead and  Quick Review: Wyrmwood.