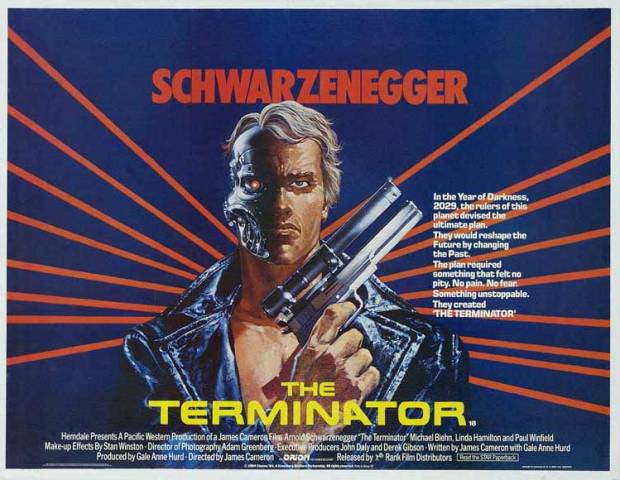 No amount of derision for the late sequels can dim the love of folk for the first two Terminator films. The lacklustre reception to Terminator: Genysis (2015) reminded me that I had never really gotten around to seeing the classic entrants into the series, so it was time for Terminator (1984). 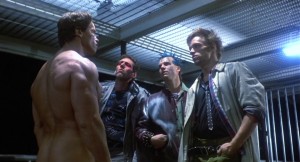 For a beloved sci-fi, the story is actually pretty stripped back. Taking place on separate timelines, 2029 and 1984, a lot of the early exposition is handled by a single screen of text explaining the rise of the machines. From there, a couple of mean dudes arrive in ’84 from the future, and the story is underway. It’s astutely written, setting up the goal of the plot (i.e. kill/protect Sarah Connor) without explaining why. It allows the action to fly from the very start, but maintains intrigue as to exactly where the plot will go. Even today, the violence in the film is quite bracing in its brutality. The body count is ultra high and with major characters possessing zero empathy, they mow numerous people down without a care. The Sarah Connor character, at least in this film, does not feel like a particularly strong one. It’s a traditionally matriarchal spot for her in a film. She has to be fought over by men, to preserve her abilities as a mother. Whilst that could be more modern, thematically the film remains resonant. You could easily patch drones onto this plot with no troubles at all. It’s a cautionary tale of the dangers of over-automation, particularly in the military sphere. 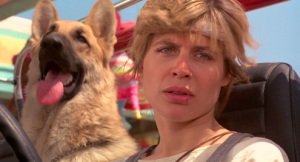 Linda Hamilton, who is so good as Sarah Connor

Arnold Schwarzenegger is a decidedly awful actor. But he does have an undeniable and unique presence to him. As such it is easy to see why the Terminator has become his most iconic role as it is designed for someone with his abilities. He doesn’t have to emote, in fact it’s better if he doesn’t. The film’s much lauded effects have undoubtedly dated to a degree. But they are yet another example of how you would take dated practical effects over dated CGI any day of the week.. It is impossible not to respect the level of craftsmanship and artistic creativity that went into the process. But there is no doubting that some of the effects work toward the film’s conclusion has a bit of a Harryhausen vibe, and not in a good way. Overall though, the design is one of the strengths of the film.  Arnie’s body and the way it breaks down looks great, whilst the interaction and fuzzy borders between man and machine is rendered effectively. In addition to the lean writing, much of the tempo can be attributed to the soundtrack. Brad Fiedel’s score is electronic, but with a real authentic sounding beat, a combination that sets the pace of a lot of the action.

Verdict: Deserving of its place as an action/sci-fi classic, The Terminator still holds up despite some of its elements showing their age. It did strike me as not particularly setting up for a sequel, so I will be interested in how forced the storytelling of future films in the series feels to me. Pint of Kilkenny

Related beermovie.net articles for you to check out: Planet of the Apes and  The Incredible Shrinking Man.