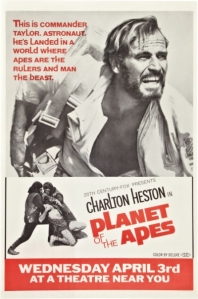 Planet of the Apes (1968) is a film that has become a really central part of pop culture. Not just through The Simpsons, though yes that did totally ruin the film’s ending for me some years ago. I hadn’t seen the film for a whole bunch of years, so thought I would revisit it to see if it still held up as a sci-fi classic for me.

I actually watched Planet of the Apes a good 10 years ago, long before I was into classic film. I recall being really impressed by it and blown away by the ending even though I knew what was coming.  It starts exceptionally well, combining thought provocation like all the best sci-fi with some nice futuristic visuals. The exploration of the mental and philosophical issues of exceptionally long space journeys is really good stuff and it leads into a spectacular crash sequence. The camerawork here is one of the highlights of the film as the camera swirls wildly while the spaceship tumbles to the ground. There is an early sense of exploration and a final closing off of the initial ideas that the film is concerned with, particularly in the manner that George Taylor played by Charlton Heston reacts to the fact that everyone he knew has been dead for millennia and he will almost certainly never get back home. These are all great questions to ponder, especially today with manned missions to Mars possibly looming, and the very real probability that one day people will have to sign up for one way space missions. The discussions between Taylor and his rather more perturbed crewmates are really well scripted and bring all of those ideas out. Unfortunately once the three men were captured by the apes, the film really flattened out for me. Aside from that capture sequence, the action is all pretty lacklustre and the narrative never particularly goes anywhere. Most of the elements of the film that work later on have very little to do with the apes actually, which are obviously the focus of the action. Rather, it is the hallmarks of the environment that have the timeless prescience of all the best sci-fi that hit the mark. The soil is totally ruined, nothing at all will grow and much of the planet is a total wasteland.

One aspect of this film that really stands out, especially given its vintage, is that it is really quite a dark film both narratively and especially thematically. The plight of the astronauts is bleak, basically from start to finish and there is a certain meanness to much of what happens. For such a mainstream film, some of the technical elements are quite bold. There are long segments with very little dialogue, the spaceship is intricately designed, there is an almost handheld sense to some of the camera work and the soundtrack is full of (at times annoying and intrusive) electronic bleeps and bops. The ape costuming work, whilst possibly revolutionary at the time, is exceptionally dated now, just looking terrible and basic. At times, I found them to be so bad that it was actually distracting. Planet of the Apes is quite famous for a number of the philosophical messages it examines. This is cleverly done by inverting the roles of humans and apes that currently exist. Humans are used for ‘animal testing’, talked down to and generally treated abhorrently. In some ways it is a very forward argument against human exceptionalism, at least that is a reading I made of the film. Unfortunately though whilst this inversion of roles is clever, there is only so much you can achieve simply by inverting the roles. The ideas needed to be, or at the very least could have been, pushed a lot further. I guess one advantage of the limited approach of the inversion of ape and human roles is that it makes the film’s messages quite universal and open to interpretation. But I still think that overall the script needed to go further with the ideas.

I was definitely less impressed with The Planet of the Apes this time around. My impression is that if you look at various elements of the film, especially the themes and some of the design, it should be a lot better than it actually is. As a whole though, I found this to be a merely good experience rather than a truly satisfying one.

Related beermovie.net articles for you to check out: Upside Down and Ben-Hur.