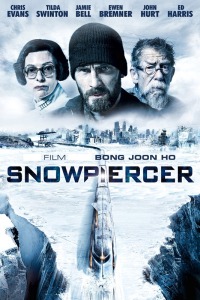 Nothing gets me excited like a film that has truly split opinions. So by the time I finally got around to watching Snowpiercer (2013) a couple of weeks ago, my expectations were pretty high. I don’t particularly fit into the love or hate camps for this film, but that is not to say that the experience was a letdown. 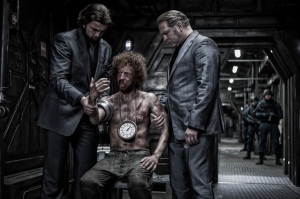 The film is set in a frigid near-future, where attempts to reverse the effect of global warming have backfired spectacularly. Only a very small amount of people survive, circling the earth perpetually on a train known as the “rattling ark” (a name I love as a piece of imagery, but which is never really utilised as it could be). The class system sees the poorer people contained at the back of the train, with the hedonistic rich folk up front. The rebellious underclass decides to fight back, which involves battling their way to the front of the train to take control. From this initial set-up, there is a charmingly natural video game level style progression along the train. For me, the best moments of the film were the action beats. They utilise the train setting best, as it is in those moments that you really feel the claustrophobic surrounds of the train pressing in on the combatants. The action also gives us the most riotously enjoyable silly moments of the film, such as the set-piece involving a night-vision massacre in a tunnel.  Snowpiercer is best when it keeps it simple early, focusing on the journey to the front of the train, rather than as the action reaches the front of the train, where things get a little silly and focused on clumsy attempts at showing the hedonism of the rich.

There is more than a hint of old school sci-fi to Snowpiercer. It opens with images of chemtrails, and the music over the image definitely invokes an 80s Cold War paranoia vibe. Much of the film seems like an affectionate nod to that era of the genre. The presentation of the film, its high-concept construction and especially the class concerns that are so prevalent in much of classical sci-fi. There is little subtlety to how these class themes are drawn. But for the most part they work well, hitting there mark a lot more than the ham-fisted barbs thrown the way of organised religion which just seem a far too simplistic, superficial and tacked on to be at all satisfying.

It is quite strange to consider a film such as Snowpiercer a performance piece, but there are a lot of fantastic talents plying their trade here in what is a refreshingly multicultural cast. Chris Evans delivers a very different everyman hero to his combination of hyper-masculinity, hyper-everyman shtick from the Captain America films. It’s much more of a real character than Cap, with an inherent weakness that bubbles over throughout the film. Tilda Swinton is spectacularly over the top as an early villain, though it has to be said, she feels like she is in a completely different film… almost certainly one directed by Terry Gilliam. Actually the aesthetic of the film overall gradually shifts from a griminess to a rather Gilliam inspired one. There are strong hints of the visual and tonal style of something like Delicatessen (1991) through much of this. Even down to the look and feel of the technology of the film, which is definitely not steampunk, but there are certain parallels to that sub-genre that can be drawn. It became too familiar for me though, distracting even, and left me yearning for the earlier sequences that felt so dirty, decrepit and grimy that they stood out

Verdict: Snowpiercer is at its best when it sticks to the simple action premise of getting from one end of the train to the other. The film makes for a unique experience and one that should be checked out if you have the slightest interest at all. I just found that the stylistic and narrative meanderings lessened the overall film. Stubby of Reschs

Related beermovie.net articles for you to check out: Locke and Rick and Morty Season 1.