I have been whinging about it pretty endlessly, but in case you managed to avoid all of that, I have had a busted back for much of the past couple of weeks. I returned to work a few days ago, but before that I was relegated to the lounge room floor, unable to sit up to write or go to the cinema. As much as I love lazing around watching movies, being able to nothing else for that extended a period of time is enough to test anyone’s resolve. Luckily though, I stumbled upon the first season of Rick and Morty (2013) which has been a total highlight and allowed me to well and truly keep my sanity. 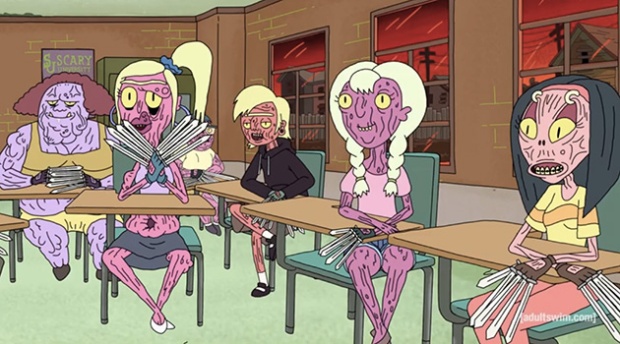 Behold the awesomeness that is the Elm Street episode

Somehow this show managed to pass me by until now. It’s created by Dan Harmon, the somewhat controversial genius behind Community and is essentially a reimagining of the Back to the Future trilogy, which is my favourite film series of all time. For all that though, the show is better than I could have imagined and one of the most hilarious pieces of television I have ever seen. It is so smart, the vulgarity (which general comes from Grandad Rick, a terrible influence) is actually funny and it brings high concept sci-fi ideas to each episode. The odd(ish) couple at the centre of the show really provides everything it needs. Rick is one of those classic animated characters of the past couple of decades who brings the huge laughs with his zaniness, crudeness and substance abuse programs – think some form of variance on Bender, Homer Simpson and Cartman and you are on the right track. But in young Morty, the show has a straight man who is also hilarious as well as providing the real heart of the show. He is a somewhat awkward teen, going along with his grandad’s incredibly dangerous space-based adventures to win his favour. But as the season progresses, the character really grows into a keen offsider and at times potential leader himself. You never feel like he is just there for the character of Rick to bounce off, Morty is an equal partner and elevates the show a lot. Hopefully that continues, because often the shows featuring some of those characters I mentioned above, fall back on the cheap knowledge that the audience will crack up at whatever one character says and does, instead of building up a satisfying cast. 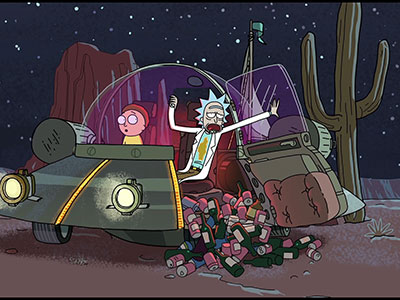 We are in something of an extended golden age for TV cartoons. Obviously kicking off with The Simpsons, but also featuring so many others such as Futurama, Bravest Warriors and heaps more. Rick and Morty holds its own with any of those. And for a film or sci-fi buff it may even surpass them, nailing clever references throughout. There is one episode that functions as an extended parody of an Elm Street, and there was something I found totally side-splitting about the way that the Freddy Krueger character called everyone “bitch”, just as he does in the actual films. There are also extended references to Jurassic Park (1993), Inception (2010) and basically every other big sci-fi property of moderately recent times. I only rarely watch commentaries on TV shows and films. But I can’t wait to revisit these episodes with the commentaries from Dan Harmon and occasional special guests such as Matt Groening, that are on the Aussie blu-ray release.

Verdict: Rick and Morty plays like the love-child of Futurama, Back to the Future and the best bits of South Park that you never realised was missing from your life. If you have the slightest interest in any of those things, the work of Dan Harmon or just truly hilarious sharp comedy, then give this show a shot. Longneck of Melbourne Bitter

Related beermovie.net articles for you to check out: Toy Story and 100 Bloody Acres.