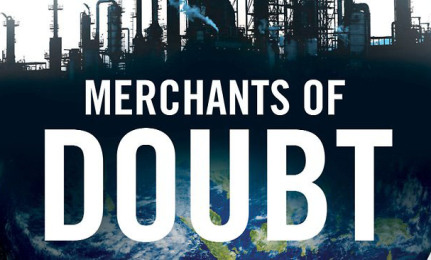 Now we all know that people who deny climate change are idiots. But those people are definitely out there and they get a lot of coverage from mainstream media. Merchants of Doubt (2014) takes a look at who these people are, how they got there and what qualifications they have to be speaking on such matters.

The first thing that Merchants of Doubt does is very comprehensively and effectively paint the similarities between the actions of Big Tobacco and the anti-climate change agenda. It is a telling comparison isn’t it, Big Tobacco being the standard bearer for the horrid deceit of the populace on a global scale, prepared to put the almighty dollar (well at least their almighty dollar) ahead of the health and wellbeing of every human being on earth. That is who the climate change lobby are taking their cues and tactics from. The point is excellently made and whilst it is something you could imagine being true, the film provides a range of rock solid examples of exactly how it is taking place. The issue with the idea in the film though is that it is made well, but the film lingers far too long on the point. I paid for a climate change film, not one about tobacco. Later in the film, there is a similarly long stretch of useful, but distracting information about the fire retardant lobby. The end result is a film that sort of sprawls. Each individual part or speaker is quite interesting. But you get to near the end and you can’t remember who spoke a couple of people ago. It is also a touch boring, because there is a lot of non-vital information that makes its way onto the screen between each nugget of gold.

At times it feels like the world is stuck in a constant, immovable dichotomy on the topic of climate change. For some reason, this issue has become a political one, with progressives on one side rigidly accepting the scientific consensus and conservatives on the other side steadfast in their position, based mainly on pseudoscience and just making shit up, that climate change is a myth. It seems like these positions are two parallel lines of people, with no flow in between. It is telling than that the two best speakers in the film are people who have crossed that divide. One is Michael Shermer, a libertarian professional ‘sceptic’ and the other is a former ultra-conservative Republican Senator whose name escapes me. Both of them make a number of really good points, but I think that they make one key one each that cuts to the heart of why this is still a debate (as a totally different person in the film observes “it is a debate, but it’s not a scientific debate”). Shermer, who attends conservative libertarian debates and boldly sells the climate change message, explains that the real issue is overwhelming tribalism. That is what makes people refuse to engage with new evidence. The senator makes the point that it is not evidence or science that is holding people back. It is fear of change, a fear stoked by those who profit from the status quo, which makes people fearful to see what is really happening. If nothing more, the position of these two conservatives, who do remain proud and rabid conservatives, is a hopeful note, that people will eventually see the scientific evidence that is shining in their face.

There is a very cool stylistic conceit in Merchants of Doubt that functions as an ‘in’ to the film. It is a magician, telling the secrets of how he crafts his illusions, or more accurately the technique of his trickery. The point being made of course is that if you take the sleight of hand and distractions that a close-up magician utilises during card tricks, blow it up to an earth wide scale, what you are left with is the tactical approach of the climate change deniers lobby. This whole conceit is perhaps the best bit of the film and gets an important balance right that the film on occasion veers to the wrong side of. It is exceptionally inventive but it is not too glossy. It functions to enlighten and enhance the ideas of the film, but thankfully does not inadvertently overshadow them at all. It never becomes the focus, it clarifies the focus.

Verdict:  Unlike some other docos that have showed at CIFF, this one does not quite transcend its narrow subject material into a broader based appeal. But Merchants of Doubt is still worthwhile viewing for those with an interest in the issue. You may just need to wade through a fair amount of unnecessary supplementary material first. Stubby of Reschs