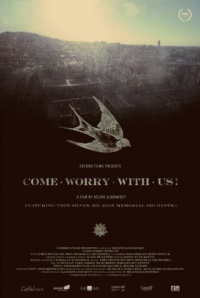 Rarely has a rock documentary looked like Come Worry with Us (2013), which provides a great insight into parenting psyche from a musician’s point of view. Jessica and Efrim are members of the band Silver Mt Zion who decide that when they have their first child they will take him on tour with them.

The band was founded along socialist and anarchist principles and as such have a very communal vibe. This is jeopardised in a way with the arrival of young Ezra when he is taken on tour. In particular, Ezra touring leads to Jessica being ostracised to a degree. This is not a conscious mean-spirited act of exclusion, but rather the practicalities of having a young child on tour make it inevitable. In other ways though there is much inclusion, as the members of the band have great interactions with Ezra and they even split the cost of a tour nanny and larger tour bus equally amongst all of them.  Much of Come Worry with Us focuses on the attempts of the couple to re-adjust their lives when a new life is brought into it. As artistic people, the amount of time to create is heavily impacted by having a child and the two of them, especially Jessica, struggle to still find the time to have their creative outlets. That is the unfortunate side-affect of the time sacrifices that a mother, especially an artistic one, must struggle against.

Traditional gender roles have definitely changed over time, though that is not to say traditionalism does not still thrive amongst some people. But there is a growing awareness that the roles traditionally thrust upon couples with a newborn child can be problematic. Jessica and Efrim from Silver Mt Zion, are highly aware of these issues through their general outlook on the world, highly influenced by socialism and anarchism. However practice is very different to theory and the couple find themselves struggling on tour as well as at home. Efrim is open about neglecting his parenting duties whilst on tour and Jessica is very aware of the fact she has slipped into a traditional matriarchal role. Given where they come from this is a real eye opener for the both of them. As someone who holds broadly similar views as the couple who is considering starting a family sometime soon, it was a definite eye opener for me too.

Come Worry with Us was definitely my favourite film of MIFF 2014. Part of that is probably because the film really spoke to where I am in life, as someone considering starting a family in the near future. It is also down to the fact that it is a really good concert tour film with an added level of interest by bringing a young kid guide along for the ride.

Related beermovie.net articles for you to check out: MIFF 2014: Cheatin and MIFF 2014: Human Capital