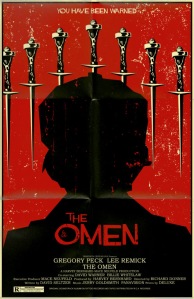 There is something distinctly 70s about The Omen (1976). That is not to say it has dated, but it has a sort of aura about it that only films from that decade such as Don’t Look Now (1973) seem to share. Just as many of our most beloved slasher films are distinctly and fundamentally 80s as well.

One hallmark of the 70s horror film, and indeed great horror films of other decades, that The Omen nails is the genuinely creepy opening credits sequence. Church chanting and singing as well as aggressive music form the backdrop to a kid casting a crucifix shadow. From there, the early parts of the film focus on the successful American diplomat Robert Thorn played by Gregory Peck and his wife Katherine played by Lee Remick. Desperate for a baby, Katherine devastatingly delivers a stillborn child. A dodgy priest in the Italian hospital where this is taking place convinces Robert to adopt a replacement kid, without her ever knowing. Especially through the first half of this film there are a number of really atmospheric set pieces that are genuinely shocking. The most confronting of all, in one of the most shocking moments I think I have seen in a film, takes place at a child’s birthday and really sets up the course of the film. A large black dog appears to one of the party guests shortly before a truly outrageous death. In a chilling finale to the sequence the same large dog appears to Damien, the child of Robert and Katherine. There are other similarly wonderful sequences that take place in a zoo and then later in a cemetery. The latter lifts the film from a bit of a second half funk, as it had run out of some of the steam of the first half, before finishing strongly.

I have already mentioned Nicholas Roeg’s Don’t Look Now and it is a film my mind kept returning to as I was watching this one. They both share a very washed out colour palette, a dank fogginess that seems to permeate the furthest reaches of the plot and characters. I think that is the intent behind the palette as well, to convey a definite mood, not just a British locale that rarely sees the sun. Biblical symbolism and elements are the other elements that permeate the entire film. Much of the core of the film’s plot comes from a contemporary interpretation of the bible and the antichrist, whilst priests, crucifixes, Satan and even a little of the redemptive power of Christ make their way into the film. And whilst I did not find the second half of the film as engaging as the first, I quite liked how it shifted into an almost Indiana Jones-esque adventure flick for a time even rocking a little globetrotting and archaeology. Also, if you are into reading behind the scenes accounts of films, do some snooping around on The Omen. It was one of those creepy cursed productions where the cast and crew had planes they were in hit by lightning, there were near misses with IRA bombings, creepy car crashes with links to the plot of the film and plenty more horrid luck afflicting those who worked on the film and their loved ones. A real life curse on a horror film can only improve it in my estimation.

The Omen is a hell of an atmospheric horror film but it also brings a fair bit more than that to the screen, with a whole bunch of quite shocking scenes. Grounding the plot in much symbolism, Christian and otherwise, means there is plenty there to mull over if you so desire. If not, a dude gets his head sheared straight off by a massive piece of plate glass in a slasher kill par excellence that comes a decade before its time, so there is always that.

Related beermovie.net articles for you to check out: The Black Cat and The Masque of the Red Death.