Probably for the first time in my life, I am a regular comic reader at the moment. I had long found comics too hard to get into, a niche subculture that I was interested in but that I struggled to find an entry point into. But after discovering a quality local shop nearby and getting into a bunch of ongoing series I am pretty hooked.

But this lack of real history with the form, means that I have no idea if film tie-ins are viewed with the same level of disparagement as they are with film tie-in novels (and a vast majority of tie-in games too). In any case, I grabbed the two issue limited series Captain America: The First Avenger the other day to check out. I am not entirely sure when the series came out, but it does seem a little strange that the series would be released more or less in association the second Captain America film. In any case, it is nice to dip back into the period world of the first Cap film. The two issues feature posters for the film as their covers. The connection to the film is made even plainer by the character design. Wisely, the character designs suggest the actors that play them in the film, without looking distractingly similar. Overall the art is assured, but relatively standard. It is a little old fashioned in a way, which helps to set the period atmosphere, capturing the hyper patriotism of the time and by extension the character of Captain America. 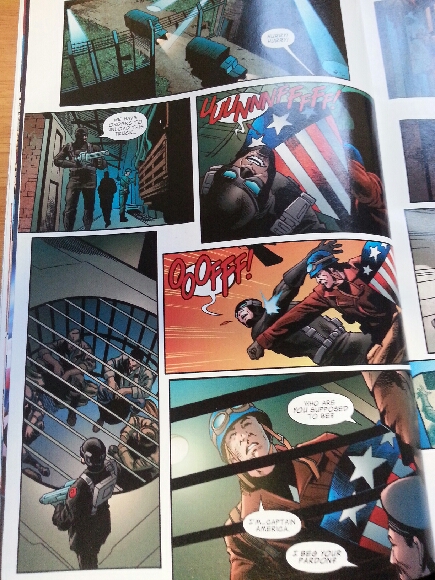 Apologies for the crappy phone photo – I couldn’t find any pics of the book online.

The major issue with this limited series is simply a structural one. There is far too much story to fit into just two issues. And when it is trying hard to do so, that is when the work splutters a fair bit. The plot needs space to breathe, but here there is not even enough space to cram the entire plot in, let alone add breathing space and other flourishes around the fringes. The writing is very wordy to try and get the film’s entire plot across. However, even with all the words, large swathes of development have to be canned because it is being adapted into such a short format. So characters come along with absolutely no introduction and events jump from one to another with large gaps in between. In reality, if you have not seen the film, the comics will be pretty hard to follow as there is just so much left out and not even really hinted at. The deficiencies in the storytelling are not just troublesome from a narrative point of view. It also means that the strength of the early parts of the comic – the war time atmosphere – is significantly diluted too, because none of it really makes it through to the story driven sequences. So much is being crammed in that only the action can be conveyed, nothing deeper.

There is plenty of really good stuff in this tie-in. But quite simply, the series needed to be three or four times longer so there was not a need to skip over such huge amounts of story. By doing that, a vast majority of the series’ issues could have been alleviated and this trip back to WWII would have been a lot more satisfying.

Related beermovie.net articles for you to check out: Comic-Con Episode IV: A Fan’s Hope and Captain America: The Winter Soldier.