The Year: 1971
The Director: Guy Hamilton
The Bond: Sean Connery
The Girl: Jill St. John as Tiffany Case
The Baddie: SPECTRE’s big guy, Ernst Blofeld is back for even more in this one
The Scene

BBQ and Bond with friends

After the not particularly successful Lazenby experiment in On Her Majesty’s Secret Service, the original James Bond, Sean Connery, was persuaded by a big fat pay cheque to return for Diamonds are Forever. 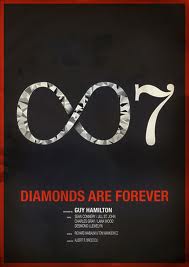 The result, whilst an improvement on the previous film, is a pretty bland effort with probably the most uninteresting narrative thus far in the series. The film starts promising enough. Shirley Bassey, the undisputed queen of Bond theme songs, belts out another absolute cracker. The film proper also has a promising start, with Bond appearing to kill his arch nemesis Ernst Blofeld. But from pretty early on it is all downhill. The film has a really quite unnecessarily complicated narrative that jumps from diamond smuggling to military testing with very little rhyme or reason. It also decides to continue the seeming obsession with space in these recent Bond films. None of it is particularly engaging at all, with the lack of a clearly defined ‘endgame’ for Blofeld and friends a major shortcoming. Assisting Blofeld are the henchmen Mr Wint and Mr Kidd, two extremely unfortunately presented homosexuals. They are caricatures and it is a real shame to see such a presentation taking place. Aside from all of that, they add very little to the film, with their menacing evil not really being directed into the story. Rather they almost seem to be part of another movie.

The film does do a roaring trade in chase sequences. Almost back to back are one of the series’ most insipid and then one of the most inspired. The insipid features a sever lack of speed as a slooow moon buggy is pursued by even slower three wheel motorbikes. The inspired comes straight after as Bond and Tiffany Case attempt to outrun the fuzz, including an incredible little sequence involving a parking lot. I think this second chase is notable because big chase sequences have not been that big a feature thus far in the series. But from this point on they do play a much larger role, providing some of the series most iconic and exhilarating moments. Just like You Only Live Twice, enjoyment of the film is severely compromised by horrid special effects. The series seems to have moved away from ‘mechanical’ explosions and the like, leading to laughable cartoony explosions. The best part of a decade earlier, the explosions in Dr No looked fantastic, presumably because they were blowing shit up for real rather than trying to create it artificially. Despite the fact that he is starting to look a little old for the role, it is somewhat refreshing to see Connery back in the main role. His rapport with Bernard Lee’s M is immediately apparent. Also back are the realistic fight scenes, with Connery’s physicality returning with a vengeance. Though to be honest, whilst preferable to Lazenby, it is undeniable that Connery has lost a step or two, his comedic delivery especially is a fair way below the sharpness that was such a feature of the first four films. Another low point of the film is poor characterisation, especially of the female characters. Bond’s main female companion Tiffany Case is a bland and ineffectual presence whilst minor characters such as Plenty O’Toole are just annoying.

After an utterly inspired run through the first four classic films, close to unequalled in a series in film history, the James Bond series is in a serious funk. These last three films, whilst this is the best of them, have been pretty darn poor. There are some nice moments in Diamonds are Forever, but they are too few and far in between. The film overall is a major disappointment, with the return of Connery not reigniting the series as one would have hoped.