Bondfest: On Her Majesty’s Secret Service

The Year: 1969
The Director: Peter R. Hunt
The Bond: George Lazenby
The Girl: Diana Rigg as Countess Tracy di Vicenzo
The Baddie: SPECTRE’s big guy, Ernst Blofeld is back for more in this one
The Scene 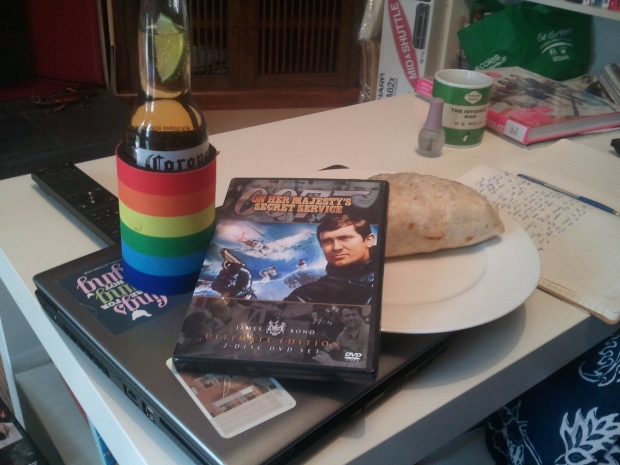 Our Aussie George’s only film in the Bond hotseat On Her Majesty’s Secret Service has long been my least favourite Bond flick. The film was not particularly well appreciated critically upon release. Recently the film has undergone reconsideration though, with Christopher Nolan a notable fan of the film, mentioning it as an influence whilst discussing the creation of The Dark Knight Rises (2012). I hate to disagree with the esteemed Mr Nolan, but I do not see the attraction to this film. 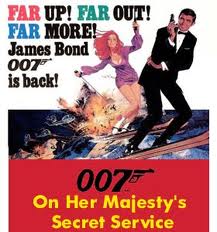 I was wrong about Goldfinger, but I struggle to see that another film from the series will displace On Her Majesty’s Secret Service from the bottom of the Leaderboard. It really is a woeful, unexhilarating experience. More than that, it is rather incompetently made, generally not a hallmark of any of the Bond series, even the poorer ones. The film’s rather strange narrative sees Blofeld attempting extortion by gaining control of the world’s food supply. Oh and Bond falls head over heels in love and gets married. Though the film does forget about this rather important subplot for a fair percentage of its running time. You can see that the filmmakers are trying to do a little something different with the character, which is understandable given the change in lead actor. But the whole thing does not ring true. I’m not sure how much of that is attributable to Lazenby, for one he definitely cannot deliver the zingy one-liners that Connery was so adept at dishing out. Connery somehow managed to take lines that would have been utterly stupid in the hands of others and make them sound convincing. This really well illustrated by Lazenby’s efforts at delivering them.

Mind you Lazenby is not helped by a woeful script that is so full of shit one-liners it at times feels like a piece of pseudo-comedy. Early on Lazenby’s Bond breaks the fourth wall, turning to the camera and saying “This never happened to the other fella.” It is a technique that fails completely. Even if you are going to have a Bond film with a silly plot, it should at the very least maintain a facade of seriousness. Even worse is another moment that toys with the boundaries of the film’s world. After attempting to quit MI6 Bond is packing up his office. As he goes through his belongings, he comes across artefacts from his previous film missions. Each time he picks up one of the items the theme song from that film blasts out. It is just a truly horrid scene. It is actually pretty difficult to choose the worst moment in the film. The lovesick montage of Bond and his bride to be is right up there with the worst in the series, not just the film. Another letdown are the fight scenes. Gone are the gritty realistic efforts of Connery. In their place we get sequences that are infuriatingly sped up and shot in a very choppy manner, suggesting that they could not get them right without tweaking them in this way. Whilst it goes close, On Her Majesty’s Secret Service is not entirely without merit. The ski chase is somewhat exhilarating, especially when Bond breaks one of his skis and races down the mountain at great pace on one leg. Similarly some of the mountain scenery is really beautiful to look at. But let’s face it, when those are the major positives of a Bond film, you are digging deep for the good points.

Everything that this film does has been done far better in the five films that preceded it. The ending, whilst an infamous one, is ineffective because what has occurred beforehand does not make you believe that it is genuinely a big deal. There is nothing to make the audience believe that this relationship is any more genuine than Bond’s numerous other flings, so the reason they would marry is unclear. Lazenby failed utterly to put his stamp on the character of Bond like no other actor who played him. Which goes a long way to condemning this to being one of, if not the worst of all Bond films.