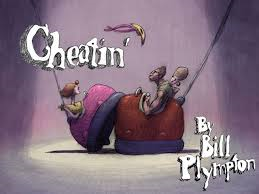 What’s a good film festival without at least one obscure animation film? Especially as, unlike many of the other films that play at MIFF and similar festivals, non-mainstream animation rarely receives a cinematic release.

Bill Plympton’s Cheatin’ (2013) was my MIFF obscure animation of choice. The first half or so is a really simple love story but told in a complex, bordering on avant-garde way. This part of the film is really engaging and retains a sense of fun, which so many avant-garde filmmakers refuse to allow in their pursuit of artistic seriousness. But then the film just turns on a plot point that is overwhelmingly silly. A doctored photo, that would absolutely never look real at all, convinces the happily married new groom (if the main characters had names, I missed them) that his wife has been cheating on him. Instead of asking his beloved what the deal is, he just turns around and starts sleeping with the multitude of women who are constantly throwing themselves at him. Obviously this is not a film that is aiming for realism. These turns in plot however just don’t work within the rules and logical expectations that have already been established in the world of the film. Another issue with all of this is that the film is really unfocused as to exactly what it is trying to say about adultery. At some points it feels like it is suggesting that as the audience we should be empathising with the groom and cheering his shagfest. In the end though, it is just befuddling the way the twists and turns are set up because he never discusses the photo with her. Then it gets even stranger when his wife gets a machine that allows her to teleport into the motel room each time he cheats on her and replace his current partner of choice. Maybe it was just me, but I had no idea what the message was there. 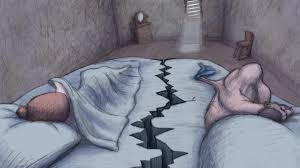 One aspect of the film that I could definitely not fault is the visuals. Plympton’s very hand-drawn style is a world away from most feature animation with a definite artistic rough finish. The colouring is a little uneven with lines left in there and the effect is that even though the result is less realistic than other approaches, the imperfections in a way make it easier to relate to and feel deeply engrossed in the story. A long way from the uncanny valley basically. The exaggerated character design is another joy, with both male and female bodies, having delightfully absurdist bodies. The groom’s abs look as tiny as a toothpick, dominated by his hugely muscular upper body. Aside from the confusion, at least from my perspective, of what the film is trying to say about adultery another issue for me was that there were no interesting ideas presented by the film. Obviously not every animation, or any film for that matter, needs to tackle weighty subject matter. But on a couple of occasions Cheatin’ hints that it is going to do so, but then either stops rather abruptly or chooses to focus on superficial concerns. In fact the very opening of the film seems to suggest that an exploration of the male gaze is in the works, as the exaggerated body of the main female character leaves a barrage of men agog as she walks by. This continues for a short while and then is just abandoned. Later, she can’t help but dance and leap for joy at the site of clothes on sale whilst her poor husband is forced to wait around bored as she giggles giddily and tries on outfit after outfit. So much for any subversiveness or incisiveness basically.

When it was telling a simple love story in a really out there way, I was totally invested in Cheatin’. The shift into a bizarre, unfocused look at adultery though was unwelcome and unsatisfying, which is a bummer because the film is so original to look at and sit down to watch.

Related beermovie.net articles for you to check out: MIFF: Jimmy’s Hall and MIFF 2014: Human Capital