Trailer for your Weekend: Pacific Rim 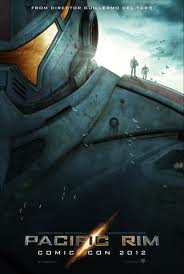 Guillermo Del Toro has not been seen behind the director’s chair too much since dropping out of The Hobbit (correct me if I’m wrong – I was too lazy to google this). But here comes Pacific Rim, his long gestating tale of robots taking on monsters.

Del Toro is one of the most beloved visionaries working in film today. I must admit I have not seen too many of his films. Pacific Rim looks pretty epic though with stunning visuals – that huge whale skeleton early on blew my mind a little bit. Aside from the terrible Independence Day style jingoism that I am not at all keen on, this has me relatively excited to check the film out. Those monsters running rampant should be incredible viewing. Here’s hoping there is some narrative originality to go with the visuals though.