I caught The Sixth Sense (1999) for the first time the other day. As I was holding my baby at the time, I couldn’t take notes as I usually do, hence this shorter than average collection of thoughts.

The Sixth Sense is of course the film that saw a relatively young M. Night Shyamalan burst onto the scene. From there, he has turned into one of the most interesting directors working today with a range of well-received thrillers sitting alongside other works considered amongst the worst ever screened in a cinema. Of course it is basically impossible to watch the film now, even as a first-timer like me, without knowing the big twist at the end. It would have been great to have seen the film without knowing it, and having that knowledge does influence every aspect of watching the film. But that simply means the film operates on a different plane than it did when breaking out in ’99. No longer is it a buzzed about film that is going to blow your mind. Now it is a well made, vaguely Hitchcockian thriller, but with bonus supernatural overtones. It is predicated on a rather stupid central premise though, which the filmmaking team does a good job of overcoming. 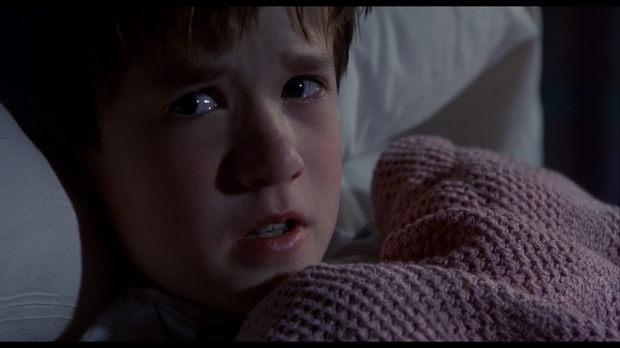 Bruce Willis gives an excellent performance here, perhaps the best of his career. There’s something heightened and otherworldly about what he is doing, which plays well in retrospect. Haley Joel Osmond is likewise excellent, nailing the big lines of the film and sucking you right into the ‘creepy kid’ elements of the story, which are the best parts of the film. The script is good at establishing Osmond as a troubled kid, though overall it is a little up and down.  Those creepy kid bits are also enhanced because they give Shyamalan license to really show off his stylistic chops as a visual storyteller. Overall the film is a throwback in terms of both tone and look, in particular recalling The Omen (1976) for me.

Verdict: There is no denying that watching the film for the first time today, knowing full well where it is going, dilutes the experience of this story. It certainly doesn’t make it a bad film. But it reduces it from classic status to atmospheric, slickly made thriller but no more. The elements are all there. But it’s just a touch too contrived to totally cohere into awesomeness. Stubby of Reschs

Related beermovie.net articles for you to check out: The Omen and  The Happening.

Trailer for your Weekend: Looper

Looper stars this guy… shamefully without that killer facial hair.

This plays like some incredible lovechild of the gangster and sci-fi genres. If it manages to keep a lid on the inherent confusions that the time-travel subgenre always seems to bring, this could be one of the most electric and original releases in quite some time. Chucking in the star of last week’s trailer Joseph Gordon-Levitt not to mention Jeff Daniels, Emily Blunt and oh I dunno, Bruce Willis certainly wont hurt my excitement levels.