For this first review back (and first longform written review for over two years) I take a look at the most famous Christmas film of all.

It is interesting to consider Frank Capra’s It’s A Wonderful Life (1946) as a Christmas film. It is not until an hour and a quarter in that it even becomes apparent the film is taking place at Christmas time. The lofty reputation as a great seasonal film essentially stems from a single scene – Jimmy Stewart’s George Bailey skipping down the main street of small town Bedford Falls joyfully yelling “Merry Christmas” at anyone or anything that crosses his path.

Despite that, it’s still a pretty easy argument to make that this is the best Christmas film ever, simply based on that one scene. The film has built up to it for the best part of two hours and the cathartic, release of exaltation is exhilarating. A release that is similar to the best feelings of the holidays. In this way, the themes of the film are not always the stock standard Christmas ones. Rather they hint at the season and invoke it’s best qualities, the idealism of it. The film also focuses on the virtues of being a good person and above all a kind friend. But the film also notes how everything takes on a harsher intensity at Christmas. So much so that it reaches the point where George is openly considering committing suicide by launching himself from a bridge on Christmas Eve. There’s something obviously very confronting to that. Particularly as it comes toward the end of a film with an incredibly deep emotional core and resonance. This is melodrama, but melodrama that somehow makes the viewer feel in a very real and grounded way. 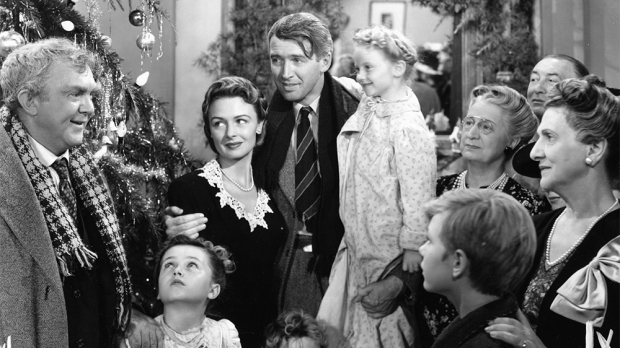 This is thanks to a seriously great script that builds ambition and dry wit on top of that melodramatic base. In terms of shooting craft, it is a combination of classical chops and innovation. It looks really beautiful, though often the angles are a bit funky. The visual storytelling, particularly early, has some more experimental flourishes. A paused image as voiceover progresses the story and a static shot of angels (represented by pulsing galaxies) discussing the goings on of earth are two of the more notable examples.

There’s a unique pain in the readjustment one must undergo from thinking you’re going to conquer (or at a minimum explore) the world, but in the end never even leaving a small town. This is what Stewart’s George Bailey goes through in this film. It’s a very good performance to convey all of that. He nails moments of rage, heartbreak and crushing stress. Those big emotion driven dramatic moments are not always his strong suit. But here he delivers them, whilst still nailing the lighter comedic beats such as the dancing into the pool, with his masterful timing. His George is utterly beset by bad luck. That, along with the fact he becomes exceedingly conflicted by being trapped in his small town, allow for the wonderful catharsis that the film closes with.

The notion of what constitutes a wonderful life is so artfully and beautifully rendered in the film’s last 15 minutes here. A stark, sobering display of the difference a ‘normal’ life can make. These are the ideas and moments that make this a real classic. It’s just a little more wonderful that they culminate at Christmas time.