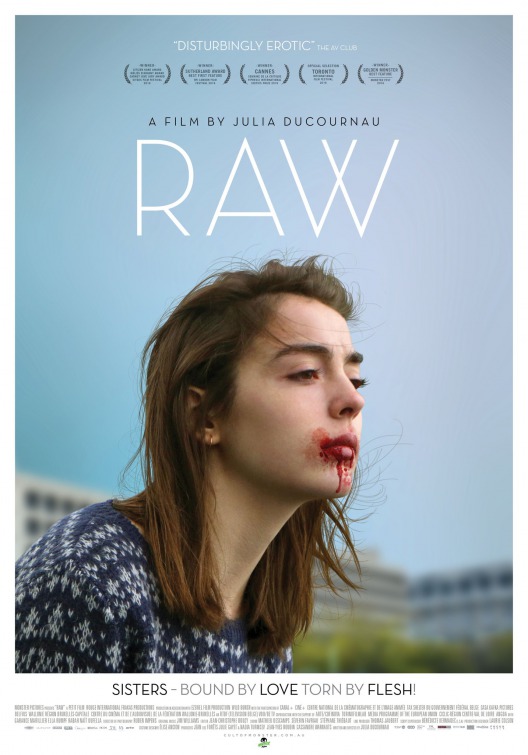 An extremely gruesome female directed feminist cannibal film is a unique sell. So perhaps it is unsurprising that Julia Ducournau’s Raw (2016) amassed a huge amount of festival hype over the past year. Even filtering out the usual bullshit about how many people fainted at each screening, this is a film that impressed and excited film fans, both horror fiends and otherwise. Festival hype can derail many a film and this seems particularly true of those in the horror genre. Thankfully though, Raw is as unique as it sounds on paper, meaning it is next to impossible for smug fans to dismiss it as something we’ve seen before. Whilst the film is notably gross and visceral, the overriding sense of the experience is deeply disquieting. The way a horse is manoeuvred whilst under sedation is as disturbing as anything far more gruesome that takes place.

Justine, a committed vegetarian, leaves home to attend vet school. There she undergoes a series of hazing rituals that culminate in her being forced (under pressure from her older sister who underwent the same rituals) to eat a rabbit’s kidney. Even before this moment the raucous college environment is confronting and unsettling. The sound design is oppressively loud and there is an inescapable intensity to the place that you desperately want to escape. Following the forced feeding, Justine develops a very gnarly rash which is the first step in a slide that will eventually lead to cannibalism. Ducournau builds this slide steadily as Justine makes small though increasingly disturbing decisions. But perhaps the two grossest, in your face pieces of body horror in the film actually precede the cannibalism. Firstly as the doctor peels away swathes of skin to assess Justine’s rash, and secondly as she brings back up huge amounts of her own hair she has been swallowing to satiate her forbidden desires.

Thankfully the thematic interest of the film goes a lot deeper than these forbidden desires being a cipher for pre-marital sex or some such trite rubbish. This is not to say consideration of taboos and the consequences of breaking them is not a very real interest that the film has. It is just that this is a really thematically dense film that does not settle for that. There is a heavy focus on sisterhood, both literal (her relationship with her sister who is attending the same vet school) and figurative (feminist empowerment). Justine does burst through the bonds that both herself and others have placed upon her through her life. And her actual sister plays a role in that. There is a sense of empowerment as she comes into her own. Much of that plays out in how she fights her sister, but also how together they fight a world that wants to dictate how they should act and what they should be. This is particularly stark as it all occurs in a vet school where the heavily ingrained misogynist culture is so well established at the beginning of the film.

One of the great achievements of Ducournau’s film is just how watchable it remains, despite the graphic flesh eating and faint-inducing hype. There is a character focus that helps with that. We never lose Justine as a young woman, finding her way in a frightening new environment that many of us have experienced, beneath the gore and chomping. The character is brought to life excellently by Garance Marillier, initially conveying the dual naïveté and drive of an ambitious uni student. Then later she is also great at conveying discomfort, embodying physical agitation in a way that is hard to watch. The film is shot beautifully, pulling your eyes into certain parts of the frame where the director wants to focus your attention. The characters move through this space at times like dancers. Early that’s ethereal, adding a strange dimension to that unsettling vibe, later it’s harsh and aggressive. The soundtrack, often coming in abrasive bursts, is noticeable from the start. It’s melodic, with the tiniest hint of malice always running underneath. The moment where Justine first tastes human flesh provides the best single piece of scoring in years, perfectly amplifying the exultant and triumphant feeling of that moment.

Verdict: Feminist, gross, dense, disquieting and still really watchable, Raw really does feel like something unique in a genre where it is so rare to say that. Even though I almost feel like I need a second viewing to properly process it all, I wholeheartedly recommend it on this first experience. Pint of Kilkenny

Related beermovie.net articles for you to check out: Wetlands and When Animals Dream.