In 2016, the title 12 Angry Men (1957) is enough to send a shiver down the spine. There are too many angry men all around us, in real life, online and in the movies we consume. Perhaps Sidney Lumet’s best film though is thankfully not as infuriating as the title would suggest.

12 Angry Men is essentially a high-concept drama, taking place in a single room. The 12 of the title are the jury in a murder case, one that initially seems cut and dry, but that quickly becomes rather more complex. Henry Fonda gradually wins some of his peers over to his point of view, told through the camera as an isolated character gradually being joined in shot by more and more characters. The film functions as a reverse crime procedural – only it is not the police who are poring over the evidence and considering every angle of the case, but the jurors. The film argues both sides in terms of questions of what constitutes justice, can it be pure and how much respect the system deserves, through the simple plot. Unlike most other courtroom dramas, this film structurally starts at a very interesting spot. We do not see one second of the trial, rather it is deemed unimportant as the film starts as the jurors begin deliberations. Or rather than the trial being marked as unimportant, perhaps it is more accurate that in the end the power in the system rests not with the lawyers or even the judge, but with the 12 doing their ‘duty’. It’s a great script. Men sitting around a table talking about a case could go wrong in a multitude of ways. But this is sharply written with writer Reginald Rose delivering something that is simultaneously all exposition and none. It is layered and definitely talky, but never in a showy way. 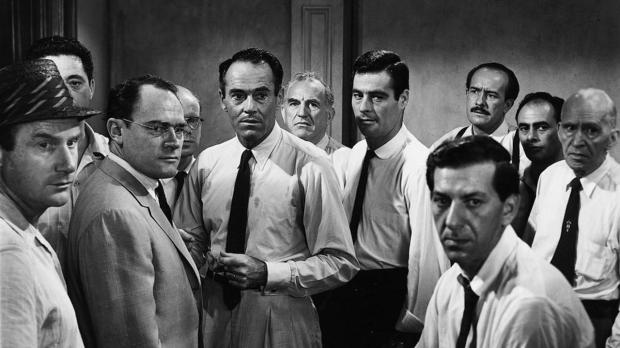 It is difficult to make 12 dudes sitting around a conference table arguing look visually arresting. Or even moderately interesting for that matter. But from the get-go, Lumet uses the camera to both create interest and more importantly impart meaning. The film opens with awed shots of the courthouse where the action will take place. This reverence for the hallowed place of the law in our society will be both reinforced and challenged over the course of the film. Lumet is not afraid to put his close-ups right out there too, filling the entire screen with a face. The shooting is simple, but the use of these shots is astute, providing moments such as a change of vote with a jolt of meaning that other films may choose to deliver through sound design. For what is in narrative terms a simple story, there is a lot going on here. And as such every interaction, every shot, feels as though it is laden with meaning. The narrative focused on single murder is used to examine the whole of society in unfortunately still relevant ways. The film has a progressive bent, especially in terms of the examination of race. How white people look down on others, the dismissal of “slums” that are a “breeding ground” where undesirables are allowed to run rampant. White men discussing an ‘other’ that they (for the most part) have zero experience with or even any interest in. This culminates in a ridiculous rant about “them” and the accused’s “type”. Lumet wants us to see how foolish this crusty old man looks as he screams his backward ideas into an abyss as more and more people lose interest. Hopefully a whole society of them.

Verdict: With its high concept, single room location and unexpected narrative structure, 12 Angry Men is a pretty experimental classic. It works well as a crime flick, a courtroom piece as well as a thematic consideration of justice, the possibility of it and the role of it in society. Pint of Kilkenny

Related beermovie.net articles for you to check out: Serpico and Network.