Over the past few years, New Zealand has been churning out some really original genre films that have gained a major following on the festival and genre scenes. Think Turbo Kid (2015) and Housebound (2014) among others. One of the most recent and beloved examples is Deathgasm (2015), yet another film that comes from super-producer Ant Timpson, who had a hand in the two aforementioned films as well as producing both ABCs of Death anthology films. 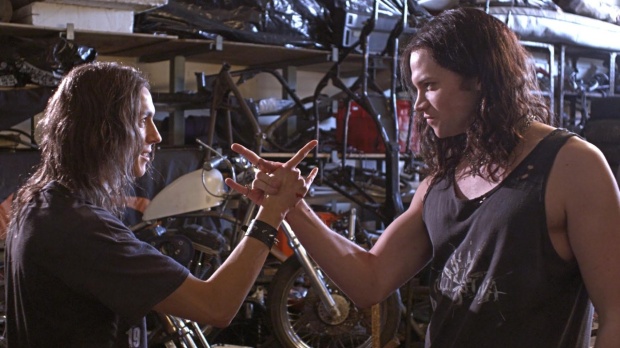 Put simply Deathgasm is a heavy metal infused demon horror romp filtered through Sam Raimi’s Evil Dead films. Though following the release of said demon, the action more or less follows a zombie film template.  It’s a fast paced film, with the story racing along. Though story is not where the film’s focus is. Most of the attention is on the schlocky, intentionally cheap looking violence and the effects. Trust me, this is a super violent and super gross horror flick. Interestingly the best comedy bits, and indeed the best moments of the film in general, accompany this violence. There are silly moments of humour laced within the violence to help mediate its impact. It would all be a little full on really if the weapons themselves and the reactions of the characters involved were not so damn funny. In addition to the violence, the practical effects also focus heavily on foaming mouths and projectile vomits. These start off cute and funny before escalating to epically gross torrent levels.

The film does have its issues. There feels like there is a lot of imagery and fan service for metalheads in the film. Which is rad. But it doesn’t do a whole lot for me because it was never my scene. Also, despite being quite pithy and funny, the script is not quite strong enough to pull off the straight comedy bits.  This is not helped by the actors not feeling like natural comedy performers in these scenes. Having said that though, the acting is really good overall. Lead Milo Cawthorne is immediately engaging and makes you care deeply about his character. Kimberly Crossman shifts from the most desirable girl in school to an axe-wielding wise-cracking badass as easy as you like. And James Blake broods well as the very funny bad boy. Here’s hoping all three of them continue to pop up in films like this. Even a sequel would be fine and dandy with me.

Verdict: This is a must see for any horror fan who doesn’t always want to take themselves too seriously. I suspect that for real metal fans it will huge amounts of fun. As it stands, it’s a very worthy addition to Timpson’s rather impressive run of getting excellent, unique horror stories out there. Stubby of Reschs

Related beermovie.net articles for you to check out: SUFF 2014: Housebound and Quick Review: Wyrmwood.