Monty Python is one of those institutions you were either introduced to at a young age and you join in the obsession, or they completely pass you buy. Given watching Monty Python’s Life of Brian (1979) was my introduction to the troupe, you can guess where I land on that spectrum.

The film takes a more is more approach to the joke count. The jokes bombard the viewer and it is hard to keep up. To be sure, many of them don’t land, in fact I would say most of them don’t. But every so often something stands out from the base level of silliness, with a level of inspiration that makes it plain why the Monty Python crew are held in such high regard by many. Unlike many of the great comedies, the jokes are really only on one level though. They mainly come from the witty silliness of the script. There is the occasional thematic hit, on religion for example, but even these are kept very light rather than genuinely subversive. This lack of subversion does date the film somewhat though with jokes using Jewish slurs, focused on a potentially trans character and some iffy rape jokes sticking out. This is not to say they were designed to offend, but they feel more dated because there is little attempt to make subversive points through the use of these ideas. 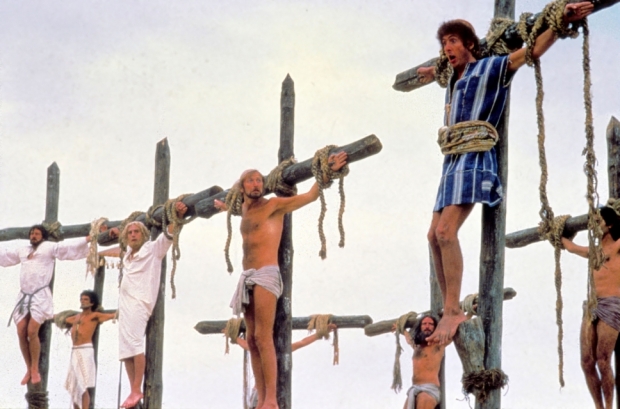 Despite the comedic writing being quite tight, perhaps the most endearing element of Monty Python’s Life of Brian is the slapdash, slightly anarchic quality that it has. Random storylines come and go with nary a care in the world, the comical Judean People’s Front takes centre stage and actors play a procession of different roles. It’s not really the kind of film where performances particularly stand out. But John Cleese’s manic energy and effort in each scene is tops. In addition, Graham Chapman as Brian, brings a charming boyish naiveté to that role. There are a couple of cracking tunes as well. I loved the opening theme whilst the final song, “Always Look on the Bright Side of Life” which accompanies perhaps the film’s best visual joke, brings back personal memories as it was the song that closed my pop’s funeral.

Verdict: All things considered, Monty Python’s the Life of Brian did make me giggle a fair bit. So on one level, mission accomplished. But beyond that, there is not really that much there, which is perhaps why this review is on the slightly short side. It’s a very well done, silly comedy. Not much more to say than that really.  Stubby of Reschs

Related beermovie.net articles for you to check out: Mr Hulot’s Holiday and  Groundhog Day.