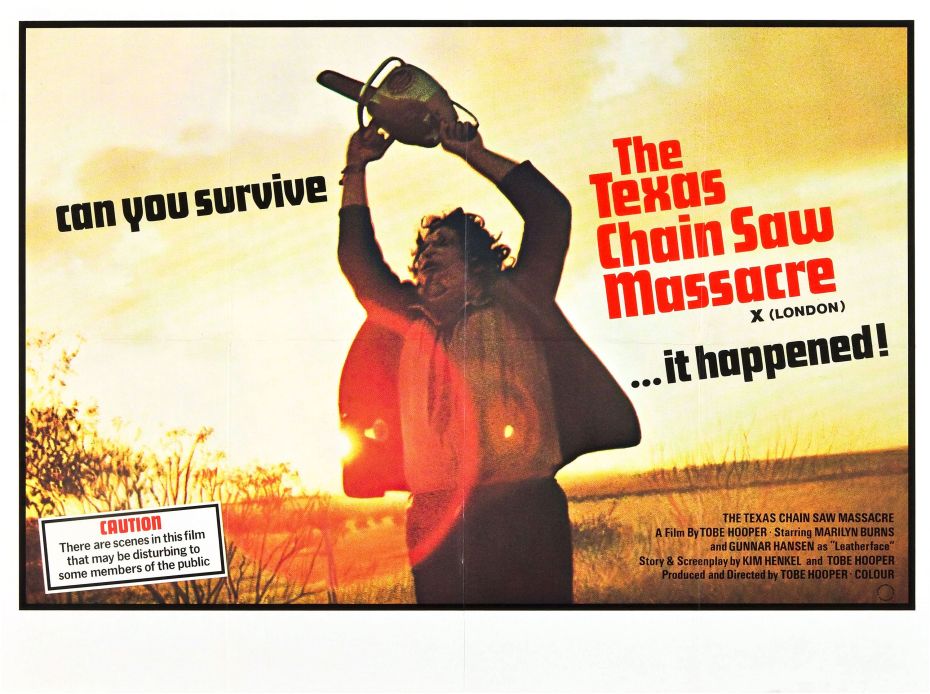 Amongst horror fiends, perhaps no film is more oft cited as a personal favourite or film that got people into the genre at a young age than The Texas Chainsaw Massacre (1974). Even if it perhaps does not hold up artistically as the absolute pinnacle of the genre, it is plain to see why the film has been so impactful for so many people.

If The Exorcist (1973) is one of the finest and most artistic films ever made that also happened to be a horror film, then The Texas Chainsaw Massacre is a short, sharp punch right in the face. Clocking in at 83 minutes, the film takes its time building up before unleashing a physically imposing villain upon a group of unsuspecting and essentially defenceless teens. The very last act slows down a little, trying to peel back the layers of motivation, and as a result the ferocious narrative force of the film tapers off a little. It also makes some silly, almost slapstick tonal choices that jar when juxtaposed with the intensity of the middle section. Though to its credit, the phenomenal final shot restores the feeling of terror that the middle section so chillingly creates. Right from the get-go of the film there is a feeling that something is not quite right, a disconcerting feeling that the world onscreen is off-kilter compared to the normality of our own. The voice-over that opens the film commenting on events to come and the utterly gross imagery that assault your eyes will immediately make you feel ill at ease. Thrown from there into a trip past a slaughterhouse and some detailed chat about the horrific ways cattle are slaughtered, it’s an atmosphere that never lets up, still underpinning events as they go from the eerie to the quick paced and shatteringly violent. It’s difficult to describe the feeling actually, occasionally it feels like you’re watching something whilst high, or that everyone in it is high. A gonzo horror film if you will, though that aspect of the storytelling does pass as the film progresses.

Contrary to some aspects of its reputation, The Texas Chainsaw Massacre is a  very well made film. It is shot really nicely, with a pretty active camera, rather than a propensity for stationary shots favoured by many horror films. The camera is never frustratingly dynamic in its movements though, it always helps to add to the tension in the film, rather than aiming to cheaply build tension through obscuring parts of the action. The film relies a lot on fast paced editing to amp up the stakes as well as push the action pace-wise to a fever pitch. That editing is largely responsible for perhaps the best moment in the film, a chase scene which quickly flits between the fleeing heroine and Leatherface, culminating in a little chainsaw on door action. Thematically, the film makes some interesting connections between animal slaughter and the slaughter of the teen characters, which helps to hold interest through the first period before the murders start up. Once they do though, this theme is rife, reinforced by costuming, the method of the murders and how the bodies are disposed of. The brutality of the film takes on a new layer when considered in relation to the themes of animal slaughter, perhaps explaining why the film and some of the actions in it are so crushingly brutal and seemingly devoid of all purpose. Killing in the film feels wholly unnecessary. This aspect of the film is the one that has stayed with me since I saw the film and is one that I think is neglected in a lot of discussion of the film. As a villain, Leatherface is perhaps a little overshadowed by his reputation, in the fact that despite the violence he unleashes, he is plot-wise somewhat inconsequential. But he’s a terrifying physical presence and his jerky and inhuman movements are totally chilling.

Verdict: The Texas Chainsaw Massacre is as terrifying as its reputation promises. At one point after a particularly unexpected slaying I was peeking behind my couch to double check Leatherface wasn’t back there. There are some missteps for sure, but it’s a classic of the genre and feels a lot more modern than the mid-70s proto-slasher that it is. Pint of Kilkenny

Related beermovie.net articles for you to check out: Halloween Special… Halloween and The Exorcist.