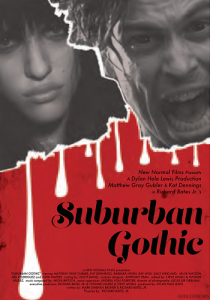 Much of how you react to a film in a festival setting can depend on the synthesis of film and whereabouts in the festival program you are. I saw Suburban Gothic (2014) on the last afternoon of the festival, in no mood to think whatsoever or have my senses assaulted.

Thankfully then, the rather mild Suburban Gothic is a nice enough way to spend an afternoon.  The film sees Raymond, played by Matthew Gray Gubler return to his small hometown after finishing up college and being unable to score a job. The film does a good job of magnifying that sense of feeling like you no longer belong where you grew up that I, and no doubt many more, have experienced.  Once he returns home, Raymond falls in with Becca played by Kat Dennings, as he tries to avoid spending time with his parents at all costs. These two head off on some vaguely comedic and vaguely supernatural shenanigans, in a film that in the end could serve as the pilot for a pretty awesome TV show. There is not a whole lot of substance here. In fact there is barely any. There is however enough comedic style to make it watchable. 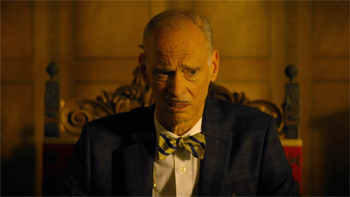 Oh yeah, this guy shows up at one point too.

The film initially was so glossy that it made my head hurt. There is a definite sheen to the film that jarred during an underground film fest. But as the film went along, it was not quite as noticeable and thankfully the film does not end up feeling like you are watching an ad for 90 mins, which is an experience some overly produced films can render. The script is well written and moderately amusing. But the main attribute of the script is that it allows the perfectly cast Dennings and Gray Gubler to light up the screen. Both of them give really good performances and without those two onscreen, you suspect the film would have been far less appealing. Overall the film is an example of one of those horror-comedies I mentioned in my review of Housebound (2014) the other day. This is really a comedy film with some horror elements thrown in. It doesn’t actually work as a horror film, which is fine, because I don’t think it is particularly trying to.

Verdict: If you are in the mood for a comedy film that you don’t need to think too much about, then you can do much worse than Suburban Gothic. It won’t blow your mind with its hilarity or style, but it will while away a little time in a pleasant enough way. Pretty good Sunday arvo festival fare basically. Stubby of Reschs