There is a fine line between gimmicky and ‘high-concept’. Thankfully though, single shot Uruguayan horror film The Silent House (2010) comes down on the right side of that equation.

The set-up is simple enough. A man and his daughter arrive at an isolated house in a rural area to clean it prior to sale. Initially the pace of the film is measured as it sets up the location, the characters and the atmosphere. This section is very assured, as the creepy tone is set without feeling the need to slap you in the face with over the top haunted house aesthetics. In terms of frights, the film is notable for reinforcing just how bloody freaky things literally going bump in the night can be. The film is moseying along early, but then a few bumps jolt you and certainly frightened me a lot. I generally don’t find horror films too hard to sit through, but this made me squirm more than any flick since The Conjuring (2013). Perhaps inevitably given the structure of the film, it does certainly drag at times. Thankfully though, the film never goes too far along without wrenching you right back into what it is aiming to do. Much of the credit in this regard goes to the lead actress Florencia Colucci who has the bulk of the screen time. She is definitely convincing in conveying the terror of her situation, not to mention her crying and screaming game is on point the whole way through. 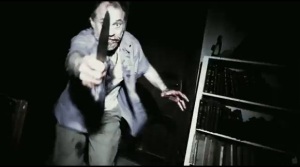 Everything about the film, from the title onward, screams classic haunted house flick. Thankfully it’s a bloody good one too, managing to be a homage to the subgenre without feeling derivative at all. Even if on a couple of occasions some elements become a little overworn, such as the use of mirrors. But then again, some of these familiar elements also help bring the film’s best moments. I’m looking at you polaroid camera sequence that is borderline unwatchable it is so terrifying. Perhaps it shouldn’t have strayed too far from the old fashioned norm though, because as the plot shifts away from convention in the second half, some of the intrigue is definitely lost. Not to mention that the film closes with a monumentally crap twist. One of those twists that is not just annoying, but it actually really effects how you feel about the film as a whole. As for the double gimmick of (supposedly) being filmed in one shot and being real time, these add to the film rather than detract from it. If the film is indeed just one shot (I never have the concentration to concentrate hard enough to actually make sure) it is a pretty exceptional effort. Rather than a staid camera that follows the characters around, the camerawork in The Silent House is noticeably bold. It’s not afraid to show off that it is a singe shot, but it never feels gimmicky and the camerawork is handheld but able to be steady in its movements and move in and out of focus when required.  There is some great stuff on the sound design side of things as well. It mixes up silence, music and good ol’ fashioned effects to bring both atmosphere and scares

For the most part, The Silent House is an excellent film. One of the few films I find genuinely terrifying, it is also very slick in its design and construction. It is a shame then my final opinion of this sharp homage to haunted house flicks is so tainted by a misfiring twist ending.

Related beermovie.net articles for you to check out: 2013 Horror Wrap and Worth Watching September 2013 (includes a review of  Russian Ark).