The Cinema of Japan: Black Belt

My week focusing on Japanese cinema has unfortunately blown out a little. That is due to me attending the Blue Mountains Film Festival (where I programmed the feature films) and having far too much fun to write as much as I planned. So the week will just be slightly elongated, with one more post to follow this one. Entries for the competition will close one week after that final post is published.

From the get-go, Black Belt (2007) attempts to ground itself in the history of karate. The film opens with black and white still photos bringing to life the historical background to the film. Whilst the film shifts into a conventional narrative, it still taps into the detail and nuance of the art of karate throughout. Whilst it branches out heavily from the narrative starting point, Black Belt is at its heart a story of succession. The sensei of a dojo dies, leaving his three main students to decide amongst themselves who should inherit his black belt. Alongside this there is another tale of a rather pantomime villainous general who interacts with these fighters, attempting to use their skills to close down dojos and replace them with brothels. This aspect of the film is perhaps less enjoyable than the conflict of fighting styles and philosophies between the sensei’s students, which kind of gets forgotten for large swathes of the film. The film can be a little wooden throughout, but there is no doubt that it utterly kicks ass once the action starts up. It promises high quality and authentic fight scenes and does not disappoint. Except for perhaps a final action sequence that is intentionally made to be a little sluggish. A risk that I did not think entirely paid off. But one that I can sort of let slide, because it is the kind of risk the rest of the film could have perhaps used a little more of, with some of it being a touch obvious and clichéd. 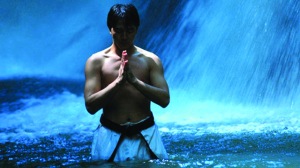 What sets this film apart from a myriad of others is the detailed exploration of the philosophy behind the art, or more precisely the differed philosophies behind the art.  To see two different stylistic approaches to a single martial art in a single film is something really quite original to behold. The main conflict in the film comes from two of the students vying for the belt. One rigidly follows the teachings of their sensei and refuses to strike back at his opponent or utilise kicks, instead using defensive techniques only. This is contrasted with the differing approach of his peer who incorporates vicious attacking striking on top of the defensive skills that he learned from his sensei. This character is Taikan, who is easily manipulated and bought into doing the General’s bidding. However the change to become the General’s lackey is quite abrupt and could have used some more explanation straight off the bat. Acting wise, Black Belt is a mixed bag. The performances in the main parts are solid, though these parts are filled with actors probably chosen more for their fighting chops rather than their acting ones. It has to be said though that some of the performances in smaller roles are a little tepid.

This review has perhaps come off reading a little more negative than I had intended.  Let me emphasise that the action sequences in this film are incredible – highly technical, vicious and smoothly pieced together. They also bring to life the two different philosophical approaches to karate that the film showcases, which is just such an interesting approach to take. The rest of the film is by no means bad; it just struggles to match up to this very high standard.

This week thanks to Madman Entertainment, you have the chance to win a copy of Ace Attorney, Black Belt plus one other Japanese film on DVD. Head here for all the details on how to enter.