The Act of Killing

Just a heads up guys, this is kind of a long review. But I had a whole lot to say about this film, so I hope you enjoy the read. 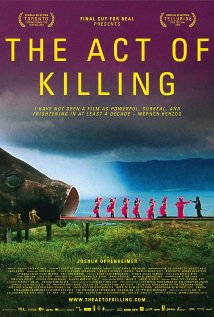 Not since childhood have I laid down to go to sleep after seeing a film, and had images from the movie flashing before my eyes. The director’s cut of The Act of Killing (2012), currently in a very limited season at Arc Cinema, had that effect on me. The film has periodically haunted my thoughts since, even now a few days removed from viewing.

The film opens with a succinct background to what is going to take place. Text onscreen informs viewers of the 1965 military coup in Indonesia. Following the coup, opponents of the military, no matter their nature, were branded “communists”. One million of these supposed communists were murdered in a single year. There is no stock footage or anything like that to accompany the text. The facts are simply laid out, before the film moves into its central focus on a number of men, most prominently Anwar and Herman who were street level executioners during this time. The elderly men calmly describe how they initially battered people to death. However this caused too much blood to be spilt. So they show off the strangulation device they came up with and enthuse about how simple and bloodless this made the entire process. It is jarring to see the same man who explains all this, tenderly nurturing his ducks and teaching his grandchildren how important it is to be kind to animals. As a result, these scenes between Anwar and his ducks are some of the film’s most effective. The men are also invited to dramatise aspects of their killing careers on film, which they devote themselves to in quite a committed manner. A number of sequences in the film see them critiquing their performances in these re-enactments, pondering how to improve the costuming the next time they do it. It is these performances, creative re-enactments if you will, and their construction that make up a majority of the film. It is really powerful to see the reflection that this entire process brings about for some of the people involved. Don’t get me wrong, this is not some simplistic tale of redemption, but rather it is people for the very first time actually processing some of the evil that they have perpetuated through their life.

Where the approach of The Act of Killing differs from anything I have seen before is that it openly engages with these murderers. This is a difficult approach to comprehend as a viewer. These men are not simply interviewed or set up to be vilified. Director Joshua Oppenheimer gets them to be a driving force behind the direction the film takes. They decide what kinds of scenes they wish to turn their past into – the outfits, the narratives, the cast. Oppenheimer is essentially letting them write their own history. But the process of doing so reveals much about the men. Their bravado is variously amplified and challenged, as well as being both illustrated and examined by the film. For much of the film the men are extremely proud of their past and see the filmmaking process as a way to ensure that they are remembered for their deeds, but this breaks down to a degree as the process continues. The manner in which the film is constructed risks humanising these killers. Actually it does humanise them. In an email from the director that was read out before the film started, he stated this was one of his intentions. Evil is perpetuated by human beings, not abstract ‘good’ or ‘bad’. The film also gets deep into the psychology of these killers, examining how they felt when killing, how they dealt with their past and how they are still dealing with it now. I have no idea how Oppenheimer came up with the idea to have the men reinterpret their killings as cinema. But somehow it is able to go so much deeper into the story than a stock standard documentary would have been able to do.

One of the many disturbing aspects of the film is that it is a film about cinema and the power of cinema. This is actually examined by the film on a number of different levels. Obviously there is the cinematic re-enactments of their murders that the men are creating and shooting. This includes incorporating their favourite film genres into proceedings. So we see a Western interpretation of killings, a gangster themed one and a number of others. The men all also have a passion for cinema. Anwar enthuses about how he worked in a cinema in the 60s. One of his favourite films was perhaps unsurprisingly Scarface (1983) and he reveals he used to incorporate the methods of killing that he saw in gangster flicks into his day to day work. This all adds up to a combination of showbiz and genocide which is in many ways as absurdist as it is chilling. And don’t worry, it is ultra-chilling. Looking at the idea on paper, it seems that there is the risk the approach will trivialise what took place. But the effect of this 2 hour and 40 minutes is if anything the opposite, a challenging look at literally the act of killing. It looks into how these murders have shaped the men who commit them, in doing so shedding light on just how heinous their actions were. On another level, we also see the discussion of the hidden history of how cinematic propaganda was used by the military in the 60s to sway public sentiment against the communists. Film propaganda is traditionally (well by me anyway) connected to World War II, on both sides of that conflict, but clearly was used in Indonesia as well. The men involved reminisce about how school children were forced to watch the same anti-communist propaganda film each year and ponder the effect that would have had.

Whilst most of the film does have a very specific focus on a couple of the men involved in the genocide, it also paints a broader societal picture. One that shamefully shows that really nothing has been learned or even processed in Indonesia in regards to these events. A contemporary politician boasts that “communism will never be accepted here because we have too many gangsters” (the term gangsters is how the executioners and their colleagues refer to themselves). Within all of the government officials featured in the film, there is a broad acceptance in the ‘rightness’ of the murders that took place in the 60s. The fact that there are numerous credits for ‘Anonymous’ at the film’s close also shows how fearful many Indonesians were in being involved with the film because of what it is addressing. There is also a strong focus on the Pancasila Youth organisation that both Anwar and Herman belong to. The organisation is still strong and seemingly beloved in Indonesia. A sort of off the grid militia embraced by politicians, mixed with just being small time hoods who intimidate local store holders into giving them money. Shockingly this horrid organisation even get a visit from the Vice President of Indonesia during the film who showers them with praise.

As a documentarian, Oppenheimer has a pretty hands off approach. He is rarely seen and only occasionally heard. These couple of times that we hear his voice though are really key moments and ones that improve the film a whole lot. Without giving too much away, in one instance he questions Anwar as to whether he really wants to show his grandchildren the violent re-enactment they have just shot. This cleverly raises questions about the perpetuation of this mindset through generations. In the other, Oppenheimer boldly challenges Anwar’s attitudes in what really becomes the film’s key sequence. I won’t say any more than that for risk of spoiling it. Like I said right at the start of this review, the film has been in many ways hanging over me, haunting me since I saw it. Usually that would mean I would put it in the ‘great films I never want to see again’ box. However for some reason, I am really keen to sit through this film another time. I suspect that repeat viewings will reveal more and more, especially because the film is quite broad ranging in the ideas it is exploring and the buttons it is pushing.

The Act of Killing is simultaneously engaging and repulsive. It challenges the traditional documentary form by using the clinical and creative deconstruction of the murderous events to tell a much fuller picture than a straightforward approach could have managed. In addition to that, the process and content of the film formulate a movie about movies different to anything else you will have seen. If you ever get the chance to see the Director’s Cut of this film, grab it. Like the director has said, it is not a film that you will ‘enjoy’ as such. But that doesn’t mean it is not one of the most memorable cinema experiences you will have.