Opening tomorrow here in Australia, Before Midnight (2013) is the third entry in the Before… series of films from director Richard Linklater and stars Julie Delpy and Ethan Hawke. I have only recently watched (and loved) the first two films: Before Sunrise (1995) which is fantastic, and Before Sunset (2004) which is something of a minor modern classic in my view. 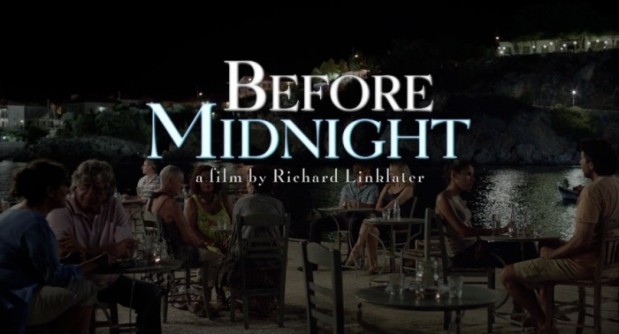 As such, expectations were pretty high for this third entry. If you have not seen either of the first two films, they are essentially romance films, that on the surface should be too schmaltzy to handle. But somehow they work really well, the improvised dialogue and realistic feel coming through. However where the first two films are a couple falling in love and rediscovering each other, Before Midnight is two people having a stupid fight. Imagine if you met my fiancée and I for the first time, and we just had an absurd, meaningless argument that just jumps from point to point for an hour and a half. An argument where the parties involved lose all perspective of why the hell they were even arguing in the first place. How would you feel about us? That is what this film is like. The snappy dialogue and rapport between Hawke and Delpy that is channelled in such interesting directions in the first two films is just mired in the blandness of everyday life here.

I respect the direction that the film is taken, but it is not what I go to the cinema for. I want the whimsical idealism of the love story between these two characters, Celine and Jesse. I was just not prepared for this very domestic drama. Before Midnight tries a fair few different things to the first two films. For starters, it introduces more outside characters, they are on a holiday with a number of other people when the film starts. It also has a bit more of a rambunctious, obvious sense of humour, which actually manages to merge pretty well with the vibe of the rest of the film. I’m not so sure that the external intrusions of the additional characters work so well though, they distract from what made the first two films so iconic, i.e. the singular focus on Delpy and Hawke. The additional characters help to make much of the film a comedy rather than a love story. Indeed, the film is part comedy and part relationship drama. None of the wondrous romance of the first two films. Overall, despite the two lead actors being once again fantastic in their roles, the film was too grounded in reality for my liking when I was just looking for a continuation of the grand love story. Before Midnight unfortunately takes these two really endearing, even if slightly pretentious characters and makes them just utterly unlikeable.

This film has worked for a lot of people, but it did not work for me. I was not ready to accept ‘real life’ from the characters of Celine and Jesse. I want a love story for the ages, not a daft argument which makes me dislike them both. There is just not enough joy in this film for me.