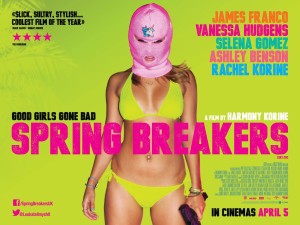 Harmony Korine’s Spring Breakers (2013) unashamedly plays into its trashiness. Naked breasts, close-ups of bronzed bodies, drinking, partying and bong hits – and that’s just the first minute. All the while, the viewer is meant to feel like there is something more going on here. Is there? Well I think for me it’s a bit of a yes and a lot of a no.

The film follows four college friends who yearn to get away from it all on Spring Break. When they discover that the money they have been diligently saving all year is nowhere near enough to finance their party times, three of the girls have no qualms in robbing a diner. This sequence of events illustrates one of the major issues with the film.  It just does not ring true. Even if you can believe that three uni students would rob a fast food joint just to fund some boozing, the violent relish they take in this task takes it too far. The young women are vicious, delighting in scaring the shit out of the patrons with a fake gun and a hammer. There is no way that people would really act in that manner, even if taking the extreme route of committing a robbery.

Gomez, who was the best thing about the film for me

Indeed one of the few parts of the film that actually feels genuine is the character of Faith, played by Selena Gomez. Faith is a committed Christian (yep, daft character name) who goes along with her rather wilder hedonistic friends. Gomez is excellent in the role and the character feels so real. She experiences real highs, the drinking, partying of spring break puts her in touch with who she really is. There is a sense that the character of Faith is exploring her Christian faith and its boundaries through her adventures on Spring Break. She is the only one of these young people who it seems is actually analysing the situations she finds herself in.  And eventually, she is able to stand up to her friends when things are clearly going awry and tell them that she is not comfortable with the way things are headed. So she packs her packs and goes home. This is a great relief, because unlike not a single other character in the film, the audience comes to relate to and actually care for Faith.

The exit of the character of Faith from the film is a major misstep in proceedings, because it leaves you with no one to care about. More than that, it leaves you with no one that actually feels like an actual person. The three remaining college friends – played by Vanessa Hudgens, Ashley Benson and Rachel Korine – fall in with the rapper and “gangster with a heart of gold” Alien, played to annoying caricature effect by James Franco. I am usually a big fan of Franco, but like so much else in this film he does not at all feel real. After Faith’s exit, the film descends into illogical meaninglessness. The women cling to Alien, presumably because of his money. Engage in violent and illegal activity, presumably… actually I have no idea why they go along with all of this. At least the initial robbery during the film had a logical motivation underpinning it, but nothing in this latter ‘gangster film’ period did. It all culminates in probably the most illogically and incompetently shot and thought out shootout that I can recall. In the beginning of it, a character literally just walks straight into a bullet, even though he sees the armed man coming a mile off. And it does not make any more sense after that. 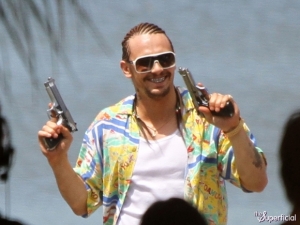 As I have mentioned, the film does embrace the hedonism of Spring Break. One of Korine’s go-to pieces of imagery throughout the film is a group of topless young women partying, often filmed with a number of close-ups of the women’s crotches. I guess for a lot of the film I was trying to work out exactly what he was trying to say with this. But with this, and the film overall, I don’t think any of the grand points that the director was hoping to achieve are really achieved. I think somewhere here, especially through Franco’s character, is meant to be a biting satire of the American dream. But it is not achieved. Similarly, I think there are many themes suggested – female empowerment, female disempowerment, vacuousness of the rite of Spring Break, questions of faith, the role of the almighty dollar in contemporary life, the wonders of substance abuse, the horrors of substance abuse – that the director throws out there but he doesn’t ram any of them home.

There are more interesting aspects to Spring Breakers than most films you will see this year. But Korine seems to have forgotten that believable characters and believable motivations go a hell of a long way. The failure to construct these, made the issues of the film insurmountable for me. So despite being a frontrunner for the prestigious ‘only decent use of a Britney Spears song in a film’ Academy Award, there is little else to recommend here. At least after Gomez exits proceedings.