“This story takes place on a quiet summer’s night, in a very small country, wishing to be as small as possible, almost to the point of non-existence. This wish is to be expected. Thus, all events, situations, characters, settings and lines in this film are made up. Nothing is the way it is depicted. But any possible resemblance to reality is not coincidental.” – Voiceover that opens the film.

After Bergman’s return to form (at least from my perspective) with his last film, it was with renewed anticipation that I popped This Can’t Happen Here (1950) into the DVD player. The delightfully self-knowing intro above is what I was greeted with, kicking off a very different Bergman journey.

Whereas most of Bergman’s early films are essentially small love stories with societal concerns. This Can’t Happen Here is a post-war spy thriller. Playing like a combination of The Third Man (1949) and some of Hitchcock’s early spy films, this is a rollicking watch which shows the range of the young director. It’s all classic spy thriller stuff – shadows, close-ups, possible double agents, women with questionable motives and much more. It is incredible how before their time the themes and narrative plot points of the film are. The threat of World War III is hanging in the atmosphere, which is also clouded heavily with anti-refugee sentiment. 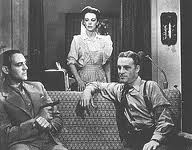 The challenge with any thriller or mystery film is to strike the balance between revealing parts of the story and maintaining an area of mystery. Reveal too much and the whole thing does not really feel worth your while. Hold too much back and it just turns into an exceedingly frustrating experience. Thankfully, the script of this film gets that balance right, feeding the audience little tidbits of info – a spy trying to sell secrets to the American embassy, an early murder, hate mail sent to refugees – but takes its time to connect all the dots and reveal what it all means. Throughout, Bergman proves himself very adept at shooting high tension. Backed by the script which is a very good thriller one featuring a bevy of spies and cops with some almost Hitchcockian tension as well. An early murder is shot slow, and is almost unbearably tense as it is totally unclear to the audience what is about to eventuate. The main plot concerns a lost list of spies and plans for future spy operations, as well as the people connected with these documents. There are love stories, betrayal and action galore too.

Whilst no doubt belonging firmly in the thriller genre, there is a definite noir sensibility about the film. The iconography is there – sun shining through blinds, the hats that the men wear and lots more – but so is some of the attitude of noir. The film is also quite modern. I have already mentioned some of the themes present that remain pertinent to this day. Some of the torture scenes as well are reminiscent of more recent screen outings such as recent Bond films. As well as that, the motivations of the characters are complex and change throughout the film. Plus there’s a car chase. That’s right, an Ingmar Bergman directed car chase. I’m not going to lie, it’s not a particularly good car chase, but it still obviously has to be seen.

It is just so great to see such a marked departure from everything that Bergman has done previously, especially as it is so well executed. Who would have thought that Bergman would pull out an incredible mix of classic spy films, Hitchcock and even James Bond; but he does so in this rollicking, enjoyable, satisfying and dare I say it populist ride which is a definite product of its time.