The Bergman Files: It Rains on our Love

“There’s a simplicity about his films. They’re very beautiful, very well acted, but at the heart of it is a very simple approach to film-making, an idea that if you record things honestly enough, and in enough detail, even in situations that seem un-dramatic, there will be the ability to move people and show what is going on behind the surfaces” – Michael Winterbottom talking about Bergman.

The first shot of It Rains on our Love (1946) sees a group of people waiting for a bus in a torrential downpour. The bus arrives, and everyone gets on it, except for one person who continues to stand in the rain. This lone figure turns out to be the narrator. A character who will guide the audience through the film, and eventually take an active role in it. It is an intriguing structural device from Bergman. This narrator in the beginning points things out to the audience, only ceasing talking after pointing out one of the main characters, at which point the film shifts into the narrative proper. It is not his final appearance though. He appears later when all is going well to ponder aloud that surely things are going a little too well. Then, even more strangely, he appears in the all-important courtroom scnee right near the end of the film where he takes on an all important role in the actual story. It is a delight that the true nature of this man and what his actual role is stays somewhat oblique and is not entirely spelled out by Bergman.

The narrative follows Maggi and David, two young people with mysterious pasts who meet and fall in love. Their initial meeting takes place in a train station after she has just missed her bus. Penniless, she allows David to organise them cheap accommodation at the Salvation Army. They make love that night, and in the morning they decide to start a new life together. Just like that. And there could have been more build up here as it does not entirely ring true. But it is obvious that these are both desperate people, so they make this desperate attempt to create something between them. The nuance and depth comes as their secrets are slowly revealed by Bergman. After he breaks into a small cottage so they have shelter from another bout of rain, David reveals that he has just been released from doing time in prison. Much later on, after they have been renting this cottage for a while, it is revealed that Maggi is pregnant, and was to a man she did not know, since before meeting David. There is much uncertainty about what will become of the couple and their attempt to start afresh. There is a repeated dialogue refrain from the first half of the film. Maggi asks David “What about tomorrow?” to which he responds “That’s another story.” It is symptomatic of the uncertainty of their lives, and the difficulty of not knowing in any way what tomorrow will bring their way. 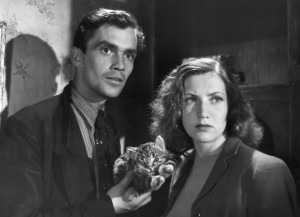 The quote at the top of this article from British director Michael Winterbottom is on the cover of my DVD copy of It Rains on our Love. I think it is an apt one because in this film the ‘surface’ that Bergman is allowing the audience to peer behind is that of society, or more specifically Swedish society. Bergman strips bare the superficiality of society, ethics and religion through the responses of various people to the plight of Maggi and David. The harsh manner in which they are treated simply because social mores deem that a loving family carrying an out of wedlock child is something to be ashamed of is something they continue to be confronted with. Indeed much of the core of the film, especially its first half, is concerned with interactions between the ‘haves’ of society, and the ‘have-nots’. A small minority act with integrity, but overall there is a distinct coldness on the part of basically everyone towards the struggling couple. The couple who own the nursery where David gets a job encompasses both of these approaches. The owner is good to him, treating him with care and respect. In contrast, his wife eventually forces him from the job with here continual suspicion and accusations. David and Maggi’s generally good willed attempts to make a new start and escape their past are blocked at every turn by difficulties. Their landlord Håkansson is the true villain of the piece, he continually manipulates Maggi and David out of their money, by making them believe that he is a decent bloke.

Poster for It Rains on Our Love

When Maggi tells David that she is pregnant he is enraged, storming out into the street. However after some soul searching, and a little intervention from our narrator guardian angel, he realises the folly of his prideful response. So he undertakes a grand romantic gesture which seals their tender relationship, both narratively and in the eyes of the audience. From here on the strength of their relationship is the new core of the film, as we see their love continue to grow. They suffer great loss, which is shown in a scene which is intensely touching and emotional. But throughout they now share a stronger bond, one of love and of a united front against a cold, judgemental society. Much of the filmis engaging, but feels like a ‘smaller’, character study compared to his first film Crisis (1946). However, the lengthy courtroom scene at the end of It Rains on our Love is by far and away the highlight out of these two films. Both of the leads have been arrested, and essentially everyone who knows them sells them out. The only ones who do not are their few friends from the slum like area that they live in. It is due to these friends, and another narrator intervention that they have hope of a happy ending. But it is tense to wait and see which ending will befall them as Bergman makes both options seem equally as likely.

From an inauspicious start (the first night in the Salvation Army does not entirely ring true), It Rains on our Love turns into one hell of a love story. A story where the audience genuinely feels for the central couple and hopes that they can have a happy ending; and a story which is touching in the journey it travels.