The Raid (2011) was the biggest breakout action flick for quite some time, probably since the not quite as good Ong Bak (2003). Whilst the quality of that film’s sequels were apparently not too crash hot, thankfully The Raid 2 (2014) not only matches the first film, it totally blows it out of the water.

The film picks up basically from where the first ended. Rama, keen to expose the corrupt police forces that betrayed him in the first film, is recruited to a top secret police unit devoted to weeding out corrupt elements. Where better to drop an undercover cop in an action film than within the confines of the city’s foremost high-flying gangsters, with a side-trip to prison beforehand. There is a really good tempo to the film throughout the whole running time. The action builds to peaks and then lets you back down again, and the beats are spot on in setting up the intrigue. And the fight scenes, oh my the fight scenes. The first one, taking place in a toilet cubicle of all places, feels so good you wonder if there is anywhere to go from there. But there definitely is. I cannot recall fight scenes in a film that are so slickly choreographed, but without feeling overly rehearsed. The creativity and escalating of them is not just about bigger, faster and bloodier. Each scene has a real distinctiveness, from the confining effect of a toilet cubicle to a scene which is sluggish due to the deep mud that the combatants are battling in. Everything in the film has a certain weight to it. The sequence of Rama punching the prison wall which featured in the trailer for example just feels like those lightning fast punches are thudding into your body. Maybe realism is what I mean by weight as refreshingly our hero even gets his arse kicked on a couple of occasions, as he should when he takes on 30-odd highly trained martial arts killers. Even later, when villains are given (awesome) James Bond-ish tics like a walking stick or a propensity for mashing face with hammers, the sensibility of the film never spills over from the realm of hyper-real to fantastical.

Where the first film was basically a straight up, high concept, action flick, The Raid 2 adds complexity, rather than just switching up the situation. The plot weaves in more police and political machinations, though thankfully it never becomes the focus and the general thrust of the narrative is always pretty clear. The film has been rightly lauded and marketed as something as an action film masterpiece. It also rests well within the gangster genre, a fact I have not seen discussed too much. All the gangster tropes are there – warring families, greed, unbridled ambition, sons trying to eclipse the father, dirty cops and more. The success of the film as a gangster piece is elevated by the novelty of having it punctuated, or rather dominated, by huge amounts of hand to hand combat sequences. Caught up in all of this action and him flat out murdering dudes, the narrative does at one point lose sight of the fact that Rama is an undercover cop with a very specific job to do. Just as it feels like it is going too far down that track though, the story re-sets and refocuses on the overarching plot which had become a little clouded. Led by Iko Uwais as Rama and Arifin Putra as the ambitious Uco, all the performances in the film are excellent, not just in the arse-kicking aspects, yet another reason why this film stands so far above the genre film norm.  Gareth Evans knows when to show restraint with his direction as well. The fight scenes are wisely under-directed which means you can see what is happening a whole lot more easily. The flourishes are left for coolly shooting streetscapes or to highlight a particular death. 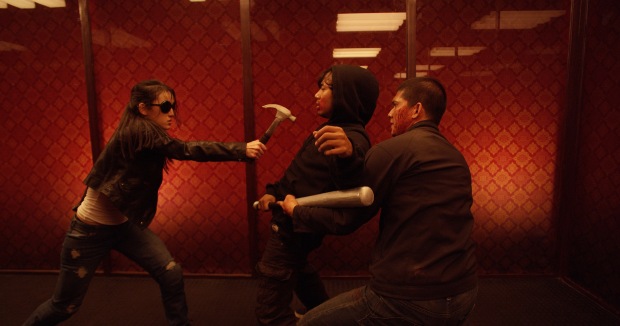 Basically you should just believe the hype on The Raid 2. As advertised, it is one of the best action films ever made, featuring creative and bloody fight scenes galore. But it is also one of the best post-2000 gangster films, perhaps even the best. See it now. If you don’t have time to see the first as well, then Wikipedia the ending and get your hands on this one.

Related beermovie.net articles for you to check out: Run Lola Run and Worth Watching January 2013.