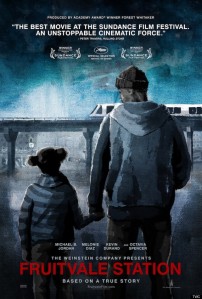 Fruitvale Station (2013) is very close to my top film of 2013 so far.  Some people agree, but many have issues with the film. Now I am all for people having differing opinions on films. It would be boring if there was no courteous disagreement. But what I have an issue with is the misreading of films and the mindless parroting of criticisms of others. Not to mention in this case the racism which seems to be bubbling just below the surface of many of the criticisms being made.

The main critique of Fruitvale Station is this: the main character Oscar Grant is presented in such a glowing way that it makes the film manipulative emotionally. I have seen this repeated over and over again. Including by Margaret and David here in Australia on At the Movies (mad respect to them both, they are rightfully absolute legends of the game out here). They were open about the fact that they were repeating criticisms made by many others, parroting this erroneous view in my opinion. In David’s words the depiction of Oscar made him out to be “too good to be true”, an opinion Margaret enthusiastically shared in their review.

In my opinion, this criticism is totally invalid and actually bullshit. Just because a film makes you feel, does not make it emotionally manipulative. The argument essentially goes like this. Oscar is too good to be true because he does the following three things: he pets a homeless dog and cries when he sees it get run over; he is a loving and tender father to his little girl who he clearly adores; and lastly he helps a young woman he befriends in a store with the details of a recipe she is cooking by calling his grandma and giving her the phone. All really lovely things done by him which make you warm to the character. Here are three other things that we learn about the character in the film: he has cheated on his partner who stood by him when he was in prison; he lost his job simply because he couldn’t be bothered showing up on time; and he threatens to beat up his old boss because he refuses to give him his job back. Oh and he has been lying to his partner about all of this. Wow, what a perfect dreamboat.

I think there may be something a little more sinister going on here too. Aside from his threat to his old boss and raising his voice a little, Oscar is a pretty laidback and quiet man. There is an expectation that a young black man should be presented in the media as an angry man, with a ‘me against the world’ attitude.  Especially a man like Oscar, formerly a neighbourhood drug dealer who has served time. He should appear angry and violent to the audience. That is how the cops see him in the film. The criticism of the character therefore actually reinforces the entire point of the film and shows that we as a society still have so far to go. The audience has seen Oscar exactly as the cops have. To show him as not fitting this mould is to make him ‘too good to be true’. It apparently automatically presents him in a manner that for some critics beggars belief. Think about that. A black man who likes dogs, his daughter and people he has just met, is to some, unrealistic and fake to the point of being manipulative.

It might not be conscious, but the criticism levelled at the presentation of Oscar is a racist one, arising from the subtle racism that pervades so much of our society and by extension our pop culture. This is particularly true in America where the war on drugs and the prison industrial complex rely on the criminalisation of young, black male bodies to exist. All kinds of white (male) characters are depicted on our screens and accepted. It is about time that privilege was extended to all in our society.