A Fortnight of Terror: Hush

It is relatively common for films with a blistering first half to be totally let down by their tepid second half. Less common is a film that manages to recover from an abysmal first half with an exhilarating second that makes the whole experience worthwhile. The low budget British effort Hush (2009) is one such film that fits firmly into the latter category.

The reason this is so uncommon is because a terrible first half means all the setup that gets the audience hooked has fallen flat. Halfway through Hush that is exactly how I felt and I genuinely believed there was no way the film could recover. The big moments of the film up to that point had more or less been bungled. The first, when a man driving along the highway sees (or thinks he sees) a woman tied up in the back of a truck, was let down by shoddy shaky-cam that made the whole thing too obscure. Whilst in the second, the man’s girlfriend (or rather ex as she has literally just broken up with him at a servo) is abducted, presumably by the man in the truck, was meaningless because it totally lacked any emotional resonance. At this point I felt that it was going to be a slog getting through the remainder of the film. I was so wrong though. From this point on, the film kicks into gear and is a relentless and thrilling ride. The entire film flips on a scene in a security office and from then on is as good a low budget 45 minute chase thriller as you are ever likely to see. All of a sudden instead of being a little bored, I was totally on edge and invested in what was happening. Seemingly from nowhere the film had shown an original streak and more importantly an ability to take me out of my comfort zone. It is rare that I feel my nerves are totally shredded by a film, but Hush achieved that in spades, deploying a balanced mix of gore and tension to get the job done. 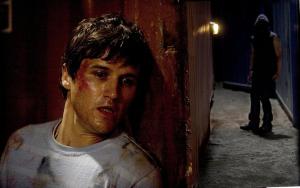 Just like the plot, pretty much everything about Hush is a really mixed bag. The acting for the most part is pretty bad. But the performance from William Ash, as the main character Zakes, is actually very good as his character becomes more and more frazzled. The script however is pretty average and I suspect contributes to the shortcomings on the performance side of things. The dialogue especially feels very forced throughout. Having said that, where the script does succeed is in terms of pacing. The second half does a really good job of building the tension up to an unbearable level, then taking it down a notch before bringing it right up to fever pitch again. I guess the film’s shortcomings stand out through the first half but are not as noticeable in the second. It does have that kind of cheap, really digital look to it. When the film gets going in the second half though, you really don’t care because you are sitting on the edge of your seat wracked with nerves. The promise shown in the second half makes me hopeful that I am able to see many more films from young writer director Mark Tonderai going forward.

If only Hush had gotten the first half right it would have been something special. Especially as it should really contain a couple of the film’s turning points. As it stands, the film is uneven, but ends so well it is worth persevering through the decidedly average first 45 minutes to get to the tasty bits.

All this fortnight you have a chance to win a copy of Hush and Hell on DVD thanks to Madman Entertainment. Be sure to head here for all the details.