Trailer for your Weekend: The ABCs of Death 2 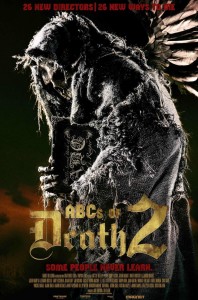 In just a few days, The ABCs of Death 2 (2014) will be available online, followed by a limited cinema release in some markets. I didn’t love the first film. A few inspired segments were overwhelmed by a barrage of average ones and a couple that were pretty offensive. But apparently this sequel got a really good reception when it premiered at Fantastic Fest recently and the concept is so rad I will probably check this one out. Trailers for anthology films are often a waste of time. I like this one though. The delightfully absurd start which left me wondering if I had opened the right video gives way to a smattering of different grabs from the film that left me wanting to know and see a bunch more. What do you guys think of this one?